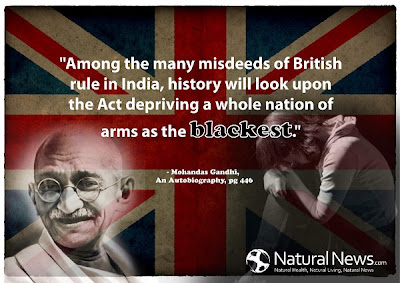 (NaturalNews) The reports are absolutely true. Facebook suspended the Natural News account earlier today after we posted an historical quote from Mohandas Gandhi. The quote reads:


"Among the many misdeeds of British rule in India, history will look upon the Act depriving a whole nation of arms as the blackest." - Mohandas Gandhi, an Autobiography, page 446.

This historical quote was apparently too much for Facebook's censors to bear. They suspended our account and gave us a "final warning" that one more violation of their so-called "community guidelines" would result in our account being permanently deactivated.

They then demanded we send them a color copy of a "government issued identification" in order to reactivate our account. Our account was removed from suspension just minutes before InfoWars posted its article on this Facebook censorship, and the Facebook page is now functioning at: www.Facebook.com/NaturalNews

As far as I know, Facebook is not a government entity, and should be permitted to censor on any grounds that it wants.  However, those of us who disagree with them over the issues they chose to censor have the right to quit using Facebook, which wouldn't be much sacrifice to me.  If this is true, and sustained, it's worthy of a boycott of Facebook. Remember, if you aren't paying for Facebook, you're the product.
Posted by Fritz at 7:19 PM