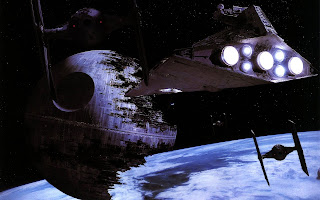 More than 25,000 individuals who live in the United States of America took the time to sign a petition requesting the White House dedicate resources toward building a Death Star of Star Wars fame by 2016.

Much like Lockheed Martin and Boeing CEOs, writers of the petition claim the government has a responsibility to start construction on the Death Star because it will spur job growth in America’s stalled economy.


“By focusing our defense resources into a space-superiority platform and weapon system such as a Death Star, the government can spur job creation in the fields of construction, engineering, space exploration, and more, and strengthen our national defense,”

...Because they garnered 25,000 signatures on their petition, the White House will issue an official response. However, prominent defense analysts across the nation said the potential sequestration cuts could put the Death Star plans in jeopardy.

It’s unclear if the signees of the petition will accept the fiscal cliff as an excuse.

If you want to get your name on a list, or possibly even more than one, you can sign the Death Star petition at  https://petitions.whitehouse.gov/petition/secure-resources-and-funding-and-begin-construction-death-star-2016/wlfKzFkN.