When Will Dick Gregory Go to Jail?

NBC’s David Gregory on Sunday held up a high-capacity magazine for ammunition on national television, a possible violation of Washington, D.C. gun law. 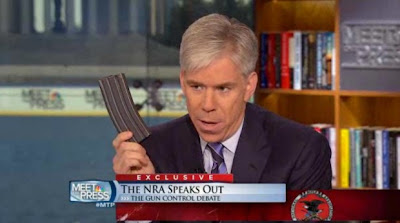 “Here is a magazine for ammunition that carries 30 bullets,” Gregory said on “Meet the Press,” holding it up. “Now isn’t it possible that if we got rid of these, if we replaced them and said, ‘Well, you could only have a magazine that carries five bullets or ten bullets,’ isn’t it just possible that we could reduce the carnage in a situation like Newtown?”

Strictly a rhetorical question, of course. Liberal jourolisters are allowed to violate the laws in the interest of the agenda.

In other news, despite castigating Wayne LaPierre for proposing armed guards at schools, David Gregory's own children go to the private school, Sidwell Friends, which has armed guards, in addition to the armed Secret Service agents there to protect the President's kids. Having their kids protected by armed guards is clearly intended to be perk for our betters. 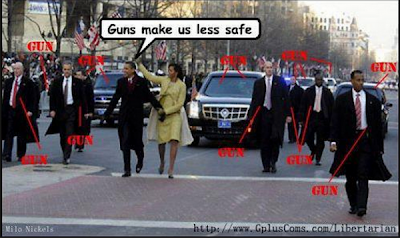