Comet of the Century to Come Early This Century

At the moment it is a faint object, visible only in sophisticated telescopes as a point of light moving slowly against the background stars. It doesn't seem much – a frozen chunk of rock and ice – one of many moving in the depths of space. But this one is being tracked with eager anticipation by astronomers from around the world, and in a year everyone could know its name.

Comet Ison could draw millions out into the dark to witness what could be the brightest comet seen in many generations – brighter even than the full Moon.

I hope so, but I've been disappointed before.  Anybody remember Comet Kohoutek?  No?  I didn't think so...


Before its close approach, Kohoutek was hyped by the media as the "comet of the century". However, Kohoutek's display was considered a let-down, possibly due to partial disintegration when the comet closely approached the sun prior to Earth flyby. This appartion was considered its first approach around the sun and that it was still frozen hard since the time of its creation. Although it failed to brighten to levels expected, it was still a naked-eye object... Because Comet Kohoutek fell far short of expectations, its name became synonymous with spectacular duds. However, it was fairly bright as comets go and put on a respectable show in the evenings shortly after perihelion. 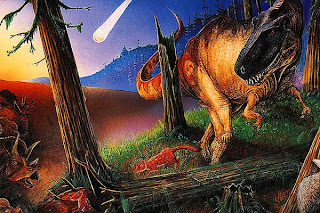 Of course, historically many people have regarded comets as omens of doom; they didn't work out that well for the dinosaurs. Though to be fair, the comet/asteroid theory of dinosaur extinction is still under dispute.
Posted by Fritz at 3:18 PM