Trouble at the IPCC

There's a long post over at Watts Up With That about a leaked draft from the upcoming IPCC draft report on global warming.  For low information readers, the IPCC is the International Panel on Climate Change, a UN sponsored effort to "evaluate" the possible existence and consequences of global warming climate change.  If you want all the info, go hit the WUWT post and dig in.  If you'll settle for a short summary of the low points, read on.

A reviewer and participant in the next IPCC report leaked a draft copy of the report that contains some interesting findings.  The leaker wrote a long missive on his rationale for leaking the report, but here is one interesting bit:


The IPCC’s official reason for wanting secrecy (as they explained it to Steve McIntyre in January 2012) is so that criticisms of the drafts are not spread out across the internet but get funneled through the UN’s comment process. If there is any merit to that rationale it is now moot. The comment period ended November 30th so the comment process can no longer be affected by publication.

As for my personal confidentiality agreement with the IPCC, I regard that as vitiated by the systematic dishonesty of the report (“omitted variable fraud” as I called it in my FOD comments). This is a general principle of journalistic confidentiality: bad faith on one side breaks the agreement on the other. They can’t ask reviewers to become complicit in their dishonesty by remaining silent about it.

Then there is the specific content of the Second Order Draft where the addition of one single sentence demands the release of the whole. That sentence is an astounding bit of honesty, a killing admission that completely undercuts the main premise and the main conclusion of the full report, revealing the fundamental dishonesty of the whole.

The draft report contains some admissions damaging to the claims of catastrophic global warming.

First, measurements of water vapor have not shown the predicted rise in water vapor in the atmosphere which is a lynch pin in global warming arguments: Small increased warming due to CO2 will lead to increases in water vapor, itself a greenhouse gas, and result in warming up to three fold greater than due to CO2 itself.  The draft IPCC report admits that they have not been able to measure any increase in water vapor:


This study shows no up or down trend in global water vapor, a finding of major significance that differs with studies cited in AR5. Climate modelers assume that water vapor, the principle greenhouse gas, will increase with carbon dioxide, but the NVAP-M study shows this has not occurred. Carbon dioxide has continued to increase, but global water vapor has not. Today (December 14, 2012) I asked a prominent climate scientist if I should release my review early in view of the release of the entire second draft report. 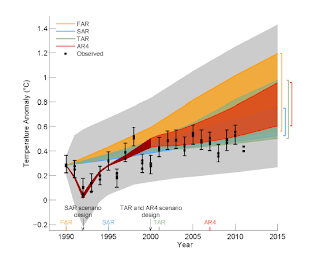 
Estimated changes in the observed globally and annually averaged surface temperature (in °C) since 1990 compared with the range of projections from the previous IPCC assessments. Values are aligned to match the average observed value at 1990. Observed global annual temperature change, relative to 1961–1990, is shown as black squares (NASA (updated from Hansen et al., 2010; data available at http://data.giss.nasa.gov/gistemp/); NOAA (updated from Smith et al., 2008; data available at http://www.ncdc.noaa.gov/cmb-faq/anomalies.html#grid); and the UK Hadley Centre (Morice et al., 2012; data available at http://www.metoffice.gov.uk/hadobs/hadcrut4/) reanalyses). Whiskers indicate the 90% uncertainty range of the Morice et al. (2012) dataset from measurement and sampling, bias and coverage (see Appendix for methods). The coloured shading shows the projected range of global annual mean near surface temperature change from 1990 to 2015 for models used in FAR (Scenario D and business-as-usual), SAR (IS92c/1.5 and IS92e/4.5), TAR (full range of TAR Figure 9.13(b) based on the GFDL_R15_a and DOE PCM parameter settings), and AR4 (A1B and A1T). The 90% uncertainty estimate due to observational uncertainty and internal variability based on the HadCRUT4 temperature data for 1951-1980 is depicted by the grey shading. Moreover, the publication years of the assessment reports and the scenario design are shown.

That's the caption for the figure from the report.  To dumb it down, the colored wedges show the the various global climate model predictions, while the black dots and error bars ("whiskers") show the measured global average temperatures.  When models fail to agree with the actual data, the models are wrong, not the data (well, generally).

Third, the report essentially reverses the position from previous IPCC reports, and concludes that there is only a low level of confidence in prediction of increasing "extreme weather events" caused by the global warming, which in light of the first two points, seems illusory in any event:


'No significant observed trends in global tropical cyclone frequency...does not support AR4 conclusions regarding global increasing trends in droughts...low confidence regarding the sign of trend in the magnitude and/or frequency of floods on a global scale...there is currently no clear and widespread evidence for observed changes in flooding'

So, to sum it all up:
Now remind me again why we're supposed to regulate our economies into the poorhouse to control carbon emissions, again?
Posted by Fritz at 4:22 PM