Why I Don't Get Paid to Be a Movie Critic

Georgia, Alex, Kelly and I went to see The Hobbit today, in 2D.  I liked it. Lot's of CGI action, some humor, a little "wisdom" tossed in for kids now and then.  Moderately true to the story, with some additions and twists to keep it from being totally predictable to those of us who have read the original book a couple hundred times (I exaggerate, but not too much).

Ace went to see movie recently, and just posted his review of it.  He hated it, and everything he says is true:


And so it is with The Hobbit. We have what should be (and which was, in literary form) a heist story, almost a sword & sorcery romp, but the filmmakers have laid over this an attempt to embiggify the story, to puff it up really, into something like the Lord of the Rings.

It doesn't work. The stakes just aren't the same.

Yes, The Hobbit book was written much more lightly than the LOTR books, with the Hobbit being written first, for children, and LOTR being written second, for teenagers and adults.  I get that.  And yes, Hobbit movie has much the same feel as the LOTR movies.  It doesn't bother me.  The books were written for different audiences, while the move must be directed for a mass audience.


For example, they've inserted a completely made-up character, an orc named Azog the Defiler, to play the same role as the Black Riders from LotR, a scary pursuer who shows up whenever the stopwatch indicates it's time for an action sequence.

I noticed that, and I could have easily done with out it, but it didn't bother me.  The modern movie audience is not the same as the pre-WWII audience that old JRR intended the Hobbit for more modern audiences, who have come to expect the black hat character to run through the movie. 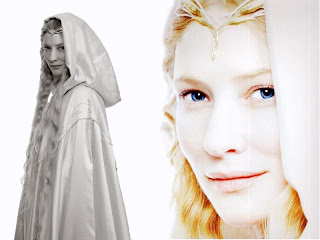 Then, at Rivendell, they make the stop there very similar to the stop featured in Fellowship of the Ring by adding in a meeting of some sort of Grand Council consisting of Elrond, Galadriel (who wasn't in the Hobbit at all), Gandalf, and Saruman (who wasn't in the Hobbit at all). This counsel talks about The Enemy and The Shadow, ideas that were only peripheral and hinted at in The Hobbit. Thus the stay at Rivendell in The Hobbit, which was quite different from the stay in Rivendell in the LotR, comes off as a copycat in the film version.

The Hobbit was written prior to LOTR, and the information this addition is based on was material from the appendices of LOTR.  In the movies, of course, LOTR preceded The Hobbit, so this material was added to help tie the Hobbit to the older LOTR movie, and also, to give PJ an excuse to insert a good looking woman hot elf chick , however goofily dressed.  Again, different?  Yes. Bad?  Meh.


The goblin sequence is ruined simply by virtue of it being so cartoonish, in both conception and actual execution (it's all CGI, all of it).

People falling 60 feet is scary, because we sense the reality of it and fear for their safety. People falling 300 feet, and surviving, is not scary. It's just silly. Peter Jackson just doesn't seem to grasp this, that more is frequently not better. Go too far and the physics fall apart and it all just seems absurd. Just because you can do it on a computer doesn't mean it will play on the screen.

Physics aren't directly applicable to a fantasy world, and PJ did a pretty good job of showing how the dwarves and Gandalf survived the huge fall in the goblin chase, with a number of slowing events.  Besides, dwarves are supposed to be much tougher than humans. Bilbo's fall?  Not shown, so similar mechanisms are assumed.

A few paragraphs ago, you were complaining the books were too adult, and not childlike enough, and now you're complain that they're too cartoonish? A little consistency please?  Also remember that in the beginning, the story is the reminiscences of  Bilbo years after the fact as an old hobbit, and the goblin part was what he had to have been told by the dwarves and Gandalf since he was missing (in "Gollum's lair" for most of it.  So yes, some hyperbole is likely built in.  Hey, it's just an afternoon, not an investment in reality.
Posted by Fritz at 7:06 PM