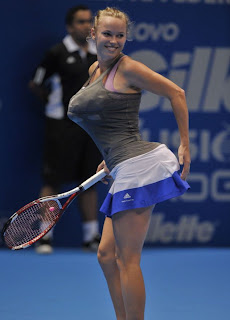 
Caroline Wozniacki has been accused of doing a 'racist' impersonation of fellow tennis player Serena Williams after stuffing her bra and shorts.

At a recent exhibition against Maria Sharapova in Brazil, the former world No. 1 stuffed courtside towels down her kit to replicate the body of the curvaceous Grand Slam champion.

But now the 22-year-old Dane, whose boyfriend golfer Rory McIlroy was in the crowd, has now been accused of racism by some observers.

Compare to the real thing:

OK, it's a little over-exaggeration.


On Tumblr, one blogger wrote: 'This isn’t “harmless fun” as one article described it. its racist. out and outright racism. mocking and making fun of the bodies of black women for a laugh? real funny, stupid white girl. real real funny.'

Are we saying that making fun of anyone's fat ass is racist?  Do only black women have big asses? I refuse to give up making fun of Rosie O'Donnel's.

Another blogger pointed out: 'It may have been done in “jest,” but I love how people can can turn a black woman’s body and sexuality into a caricature. However, we should not have the autonomy to celebrate any successes of our own. 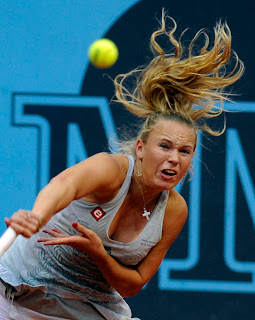 Huh? I steadfastly maintain the autonomy to celebrate any successes of my own.

While on feministing.com, an article read: 'Given the history and current-day context of racialized standards of beauty, and the hypersexualization of people of color, when a white woman makes fun of a black women’s body, especially in a way that hypersexualizes her and draws on the stereotype of black women’s big butts, it’s racist.'

Did she ever say she was imitating Serena?  I don't think so.  How can you be sure that's what she was doing.  Making the assumption is racist.

Beside's it's back in style again.

That Taj Mahal sure is racist.

Picked up by The Classical Liberal for "Cold Shot" Rule 5 Thursday, with Stevie Ray Vaughn and Double Trouble. Wombat-Socho checks in with "Rule 5 Sunday: Night Flights" over at The Other McCain" right on time!
Posted by Fritz at 9:07 PM