... died.  Or, as Wombat-Socho prefers to call her, the unmentionable Armenian, famous for being famous, for inheriting a lot of money, and for doing her best to recycle it back to dress,  shoe and car makers, for dating the infamous, and posing for a variety of magazines, including Playboy (NSFW).  I just wanted to use the title. 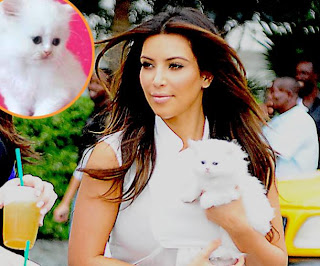 "It is with deep sadness that I have to tell you all that my kitten, Mercy, has passed away," Kim wrote on her blog Dec. 7. "My heart is completely broken."

Although Mercy showed no signs of illness, E! News learned that on Nov. 26 Hitchcock's boyfriend called to tell her Mercy was limp and not moving. They rushed her to an animal hospital where veterinarians made the terrible diagnosis -- a fatal virus, which acts like a cancer, had attacked Mercy's stomach.

Since even aggressive treatment wouldn't help the kitten, Hitchcock decided to have her euthanized. 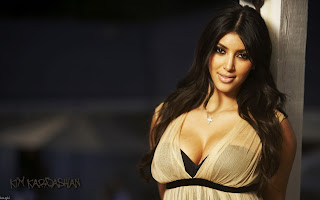 We had a full Persian cat like that once, but we got it the honest way.  The white trash next door  who originally owned it moved away, and the cat came over to our house after a few days.  We contacted them, and they referred vaguely to friends they had given it to (whom they would not name), and wished us well.

We renamed him Furball, after the way his hair matted and clumped if not constantly groomed.  And since he was a nasty, unfixed Tom, he was unpleasant to comb, mean to our other cat, prone to infections after his many cat fights, and generally a pain in the neck, he never got groomed, although we sliced the mats off occasionally.  But we did grow to love him, and we were sad when he conveniently got run over in the street a couple of weeks before we were to move from Oregon to Florida, saving us enormous trouble and expense.

Sorry about the cat, Kim.

Picked up by The Classical Liberal for "Cold Shot" Rule 5 Thursday, with Stevie Ray Vaughn and Double Trouble. Wombat-Socho checks in with "Rule 5 Sunday: Night Flights" over at The Other McCain" right on time!
Posted by Fritz at 6:00 AM

Email ThisBlogThis!Share to TwitterShare to FacebookShare to Pinterest
Labels: cats, Cuties, health, Me