The Snowbirds Return to the Beach 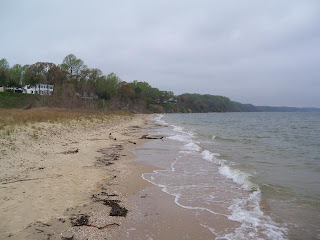 We had some rain this morning, so we put of the walk a little longer than we needed to, and arrived close to 10 AM.  As you can see, it was still cloudy and the tide was high, far above the "predicted tide" for today, thanks to the south winds that blew yesterday.  It was cool, about 50, but the wind was mild from the north. 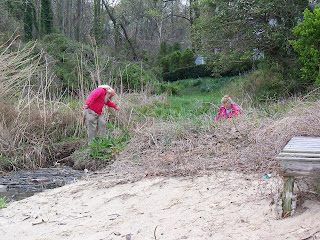 The first thing we noticed when we drove up was Joel's van in the parking lot. (That little red dot in the photo down the beach is his shirt).

There was a certain amount of scrambling on the beach today to get around objects due to the high tides.  Here Georgia and Joel pick their way through the Phragmites stalks to get around the flooded creek.  I walked across the sand bar. 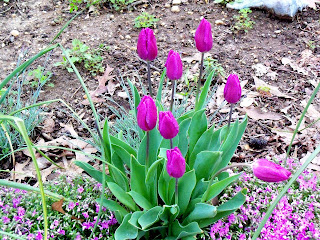 Of course, with that high a tide, we had to walk the streets around the narrow spot on the cliff.  Lots of things are blooming now; here are some tulips we encountered... 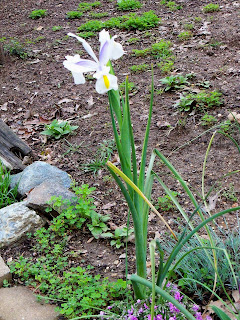 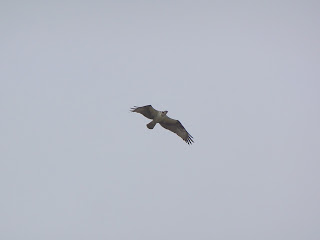 The Ospreys are back, too!  Everyone else in Maryland reports that they were back before the "customary" day, St. Patrick's Day, however, ours were late, appearing some time this week.  I'm sure the eagles are relieved that they can stop hunting and start stealing again. 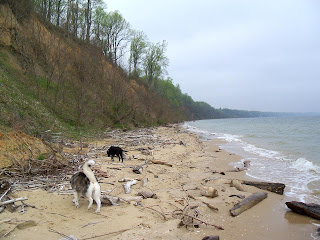 Skye and Red had their usual brief greeting and then went back to their usual style, of hunting for stuff together, yet separately.

Skye really seems to have benefited from a change in arthritis medicine over the past week, and it really showed in her energy on the beach, and afterwards. 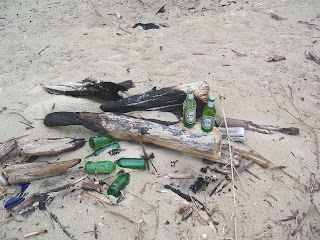 A terrible crime.  Not only did they litter, and break some beer bottles, they left two full bottle of beer in the sand.  I just don't understand kids these days... 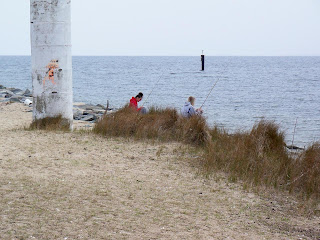 A couple of hopeful fisherwomen trying their luck off the jetty.  I didn't see them catch anything while we were there (and we stood there about 15 minutes talking to a friend).  I think they might be a little early, but, hey, if you don't fish, you'll never catch anything.
Posted by Fritz at 1:55 PM