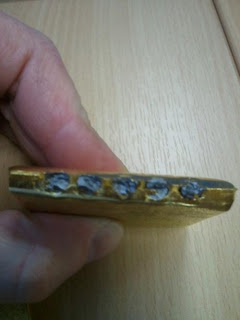 
It is now time to rekindle the Tungsten Spirits with a report from ABC Bullion of Australia, which provides photographic evidence of a new gold bar that has been drilled out and filled with tungsten rods, this time not in Germany but in an unnamed city in the UK, where it was intercepted by a scrap metals dealer, and was supplied with its original certificate. The reason the bar attracted attention is that it was 2 grams underweight. Upon cropping it was uncovered that about 30-40% of the bar weight was tungsten. 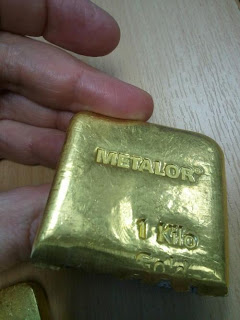 So two documented incidents in two years: isolated? Or indication of the same phenomonenon of precious metal debasement that marked the declining phase of the Roman empire. Only then it was relatively public for anyone who cared to find out on their own. Now, with the bulk of popular physical gold held in top secret, private warehouses around the world, where it allegedly backs the balance sheets of the world's central banks, yet nobody can confirm its existence, nor audit the actual gold content, it is understandable why increasingly more are wondering: just how much gold is there?

Gold is tempting to buy at this point because, even though inflation is low at this point, given the level of deficit and debt, it is unlikely that the Fed can keep it that way indefinitely. At some point, they will realize the only way out of the debt problem will be to inflate it away, and it will happen.

Holding gold personally is tempting too, because when everything goes to $#!*, you don't want to trust the banks or financial institutions to hold it for you (MF Global, anyone?).  However, how do you protect yourself against this?  You can easily weigh a 2 gram difference in a 1 kg weight, but what if they were a little brighter, and kept the weight identical, and inflated the volume 0.1%?  You could measure the specific gravity, but that's not quite as easy with home tools.

You can be pretty sure, that if there's one bar like that out there in circulation, there are thousands more.  So, if you like to keep your gold in heaps in your treasure room, I would beware of bars of unknown provenience.  It would be tempting to stick to gold coins.
Posted by Fritz at 8:28 AM