Blue Cats in the News Again

No, not kittens, but our giant Blue Catfish - Monster catfish may cause monster problem

Blue catfish are monsters — in more ways than one. They grow to gargantuan sizes, reeling in anglers who live for the thrill of catching a giant trophy fish that can weigh more than a small child. But they’re also an invasive species that can wreak havoc on the Chesapeake Bay’s food chain, gobbling up small fish and leaving little for other big fish to eat.

I hear that over and over from managers and others who would try to pare down the blue cat population, but I don't see the data; what fraction of the available forage do blue cats consume?  No one is saying.  They probably haven't been able to estimate it because they don't have 1) an accurate knowledge of the blue cat population, 2) the amount of different things they eat, and 3) the amount of available forage.


Regulators in Maryland and Virginia are trying to control these whiskery invaders, and federal officials who work on the bay have officially declared blue catfish as a problem that needs fixing.
...
Blue catfish get so big because they are not picky eaters. Maryland’s Department of Natural Resources has done a few stomach surveys — they see what’s inside a dead fish — and found all sorts of fish, including at least one northern snakehead, a fellow problematic invader.

That's just BS.  Very few fish are picky eaters.  Most fish, even allegedly grazers, will eat some animals if it's easy enough.  Some of the largest animals in the world are really picky eaters; they just eat a few things that are available in very great quantity (think whales and elephants). Very little separates the eating habits of the blue cats from other similar native catfish.  What determines their ultimate size is their genetics, growth rates, and some innate physiological factors, such as their ability to take up oxygen from water as they get larger.


...
While there’s an official kill-on-sight rule for snakeheads, there’s no such death sentence for blue cats. Still, “we prefer that you kill it and eat it,” Cosden said.

However, not everyone feels that badly towards the Blue Cats...


Capt. Mike Starrett of Indian Head Charters knows the economic benefits of blue catfish. He has clients come from out of state for charter fishing trips to catch blue cats on the Potomac River.

Starrett said anglers are almost guaranteed to catch blue catfish if they go fishing at the right time of year. The high probability of success makes blue cats popular. “It’s the kind of fishing that everyone can do,” he said. 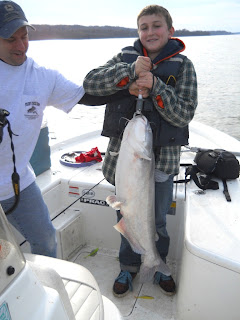 Starrett usually releases larger fish back into the water, especially since they aren’t usually eaten because of concerns over contamination in larger fish.

“There’s an old Indian saying, ‘Never kill what you won’t eat.’ ... There’s no sense in killing them,” he said.

As you may know, I'm a friend and sometimes client of Capt. Mike, and I have gone out after the blue catfish in the Potomac with him.  It's a ball, and there's no fish like it in the Bay (well, unless you hook a big sturgeon, and that's darned unlikely.

We are stuck with the blue catfish now; they'll never be eradicated.  We might as well manage them as a sports fish, and seek to maximize their value in that manner, consistent with keeping a healthy balance of species diversity in their habitat.