The Joint Committee on Taxation yesterday reported that the "Buffett Rule" would generate less than $5 billion per year, less than 0.7% of the deficits projected under President Obama's budget (original letter; updated letter). From The Examiner 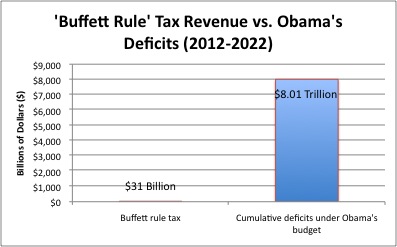 I love graphs.  Billions (with a b) and trillions (with a t) of dollars just roll off the tongue like they're the same thing.  Now a good honest graph, with a zero origin, shows what's really happening.  See that slightly widened line at the bottom on the left?  That's the share the "Buffett Tax" would supply compared to the Obama administrations projected deficient, for 10 years, the big bar on the right.

The Obama admin wants to raise taxes to cover the deficit before cutting spending, but there's just not enough money to be taken to close the gap, not without seriously impacting the economy, and killing the goose.

I found this at TaxProf Blog, via Instapundit.  I have to thank the good professor for making this known, as I can't bear to read TaxProf Blog routinely; it's just too depressing.
Posted by Fritz at 6:00 AM

Email ThisBlogThis!Share to TwitterShare to FacebookShare to Pinterest
Labels: budget