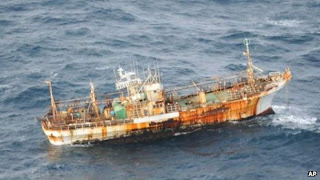 A Japanese fishing vessel swept away by the March 2011 tsunami has been spotted adrift off the west coast of Canada.

It is believed to be the first large item from the millions of tonnes of tsunami debris to cross the Pacific.

No-one is believed to be on board the ship, registered in Hokkaido, Japan.

Canada's transport ministry is monitoring the vessel for marine pollution and to see if it becomes an obstruction.

I'm surprised that some government agency of some country hasn't boarded this and sunk it as a hazard to navigation, or that some private operator has not claimed the ship for salvage.  I've seen dirtier looking boats in American harbors...  If nothing else, the scrap metal has value.

Previous postings on tsunami trash here and here.  Found at Theo's.
Posted by Fritz at 6:00 AM