Cool and Misty at the Beach 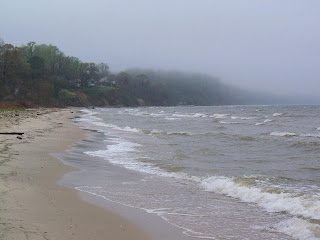 The sloppy weather continues today, cloudy, a few showers, windy and only about 50 oF. 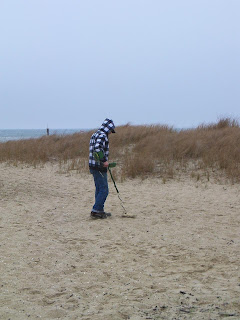 This guy prospecting for metal was the only person we saw on the beach.  I don't offer him a lot of hope of finding gold coins; that whole stretch of beach has accreted since the jetties were built in the 1930's or so, so most of the beach trash will be newer, so you might find some silver, but that's about all. 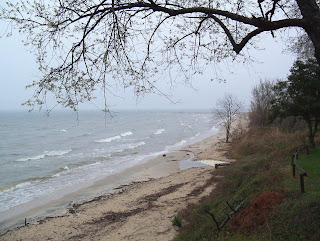 We couldn't walk around the narrows due to a high tide, so we walked up the steps to Calvert Beach, and decided to walk the neighborhood back to the car. 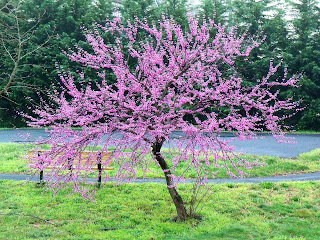 A Redbud (Cercis canadensis), a small flowering  understory tree native to the region, which flower early, while most trees are still bare.  They're quite distinctive in bloom, but sort of inconspicuous the rest of the year.  They are also sold in nurseries, so I don't know whether this one is left over from when the area was clear, or store bought, though I suspect the latter. 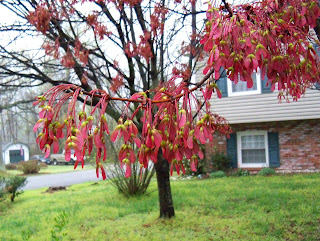 All the maple trees look red now, and this is why, the developing samaras (winged fruit), or as we used to call them, whirligigs. 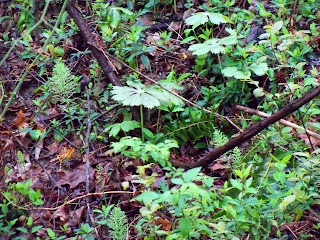 
The ripened fruit is edible in moderate amounts, though when consumed in large amounts the fruit is poisonous. The rhizome, foliage and roots are also poisonous. Mayapple contains podophyllotoxin, which is used as a cytostatic and topically in the treatment of viral and genital warts. 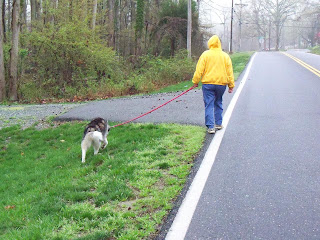 So there you go, if you have warts..

Walking the dog on the leash on the streets is a treat, especially when she hasn't been there in quite a while.  Every hummock, bush and stump must be nasally checked for pmail, and the occasional return message left.
Posted by Fritz at 5:42 PM