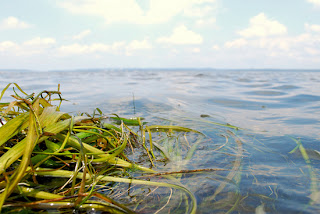 The results of the annual survey of submerged aquatic vegetation in Chesapeake is out, and the results weren't good.

So much for the facts.  Now comes the finger pointing...
It's no shock to me that the spring floods and September storms played havoc with the grasses in the upper bay.  I would have been surprised if they hadn't, I wonder if the effects due to Irene and Lee have been accounted for, though, as they occurred after the peak growth of the grasses, and presumably after the survey was conducted.  However, it turns out they may also have had a positive effect:


"2011 was the year that bucked two trends we’ve seen over the last decade,” said Lee Karrh, chair of the Bay Program’s Submerged Aquatic Vegetation (SAV) Workgroup. “The Upper Bay had major decreases after years of increasing or sustained high acreages. On the other hand, the brackish parts of the Middle Bay witnessed dramatic increases in 2011, after prolonged decreases since the turn of the century.”

According to the Washington Post, the increase in the Middle Bay was due to lower than normal salinity stimulating the germination of dormant seeds of species more common in the Upper Bay.  Part of the Bay's mysterious restorative processes.  Even the bad things sow the seeds of the good things...
Posted by Fritz at 7:29 PM