Courtesy of the Internet: From the WAPO

"One of my predecessors, Rutherford B. Hayes, reportedly said about the telephone, 'It's a great invention, but who would ever want to use one?' That's why he's not on Mount Rushmore because he's looking backwards. He's not looking forwards." The facts are different...


Hayes, the nation’s 19th president, served only one term, 1877-1881, after a very close and disputed election that needed to be settled by an electoral commission. (He went to bed thinking he had lost to Democrat Samuel Tilden.) He was a master politician who banned liquor from the White House for political purposes (and to curb boorish behavior by members of Congress). 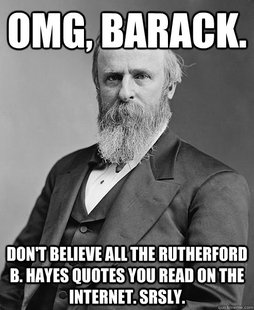 The quote cited by Obama does exist on the Internet, but we would expect the White House staff to do better research than that. (This line was in the president’s prepared text, so it was not ad-libbed.) But the trouble is, historians say that there is no evidence Hayes ever said this. Not only that, contrary to Obama’s jab, Hayes was interested in new technology. 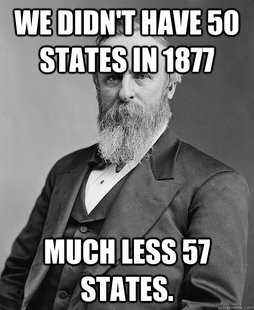 According to Ari Hoogenboom, who wrote the definite biography, “Rutherford B. Hayes: Warrior and President,” Hayes entertained Thomas A. Edison at the White House. Edison demonstrated the phonograph for the president. “He was hardly hostile to new inventions,” Hoogenboom said. 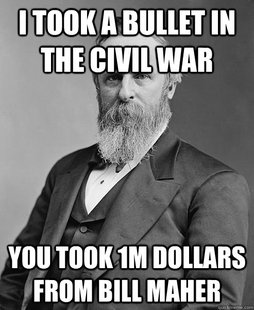 Hayes, in fact, was such a technology buff that he installed the first telephone in the White House. A list of telephone subscribers published in the article “The Telephone Comes to Washington,” by Richard T. Loomis, shows that the White House was given the number “1.” 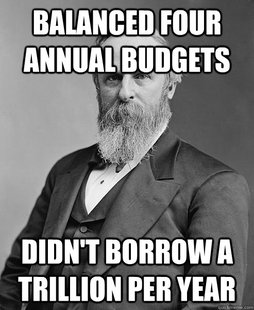 See the rest at Quickmeme.
Posted by Fritz at 10:43 PM