Humans hunted Australia's giant vertebrates to extinction about 40,000 years ago, the latest research published in Science has concluded. The cause of the widespread extinction has provoked much debate, with climate change being one theory.

However, scientists studied dung samples from 130,000 and 41,000 years ago, when humans arrived, and concluded hunting and fire were the cause.  The extinction in turn caused major ecological changes to the landscape.

How do they conclude that it was human intervention?


They found Sporormiella spores, which grow in herbivore dung, virtually disappeared around 41,000 years ago, a time when no known climate transformation was taking place. At the same time, the incidence of fire increased, as shown by a steep rise in charcoal fragments.

It appears that humans, who arrived in Australia around this time, hunted the megafauna to extinction, the scientists said.... 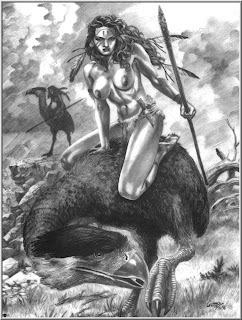 So, they found the evidence in $#!*?  How prosaic!  Still, it seems like the end of a rather long logic chain, and dependent on a number of coincidences.  I don't think Las Vegas CSI would win the case on this evidence..


Mixed rainforest was replaced by leathery-leaved, scrubby vegetation called sclerophyll. But these changes to the landscape took place after the animal extinctions, indicating that they were the result of the extinction and not its cause, they said.

Human-lit fire - deliberately targeted and more frequent than lightning - had a devastating effect of plants that had previously been protected.  "Any climate change at those times was modest and highly unlikely to affect the outcome," author Matt McGlone wrote in Science.

I guess I don't really doubt that humans did in most of the megafauna, but I wonder why the megafauna of Africa, original home of the human race fared so well compared to the megafauna of Australia, North America, Europe and Asia.  Did the African megafauna evolve in conjunction with increasing/evolving human influence and thus avoid the worst?
Posted by Fritz at 10:14 PM