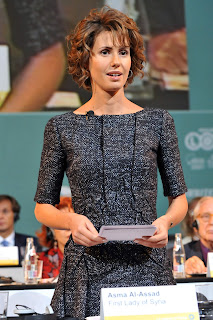 At the height of the Syrian army's assault on Homs, President Bashar al-Assad appears to have sent his wife the lyrics from a country and western song, while the British-born Asma spent thousands of pounds on jewellery and furniture.

Thousands of emails purporting to be from the presidential couple and their inner circle have been disclosed by Syrian opposition activists, throwing open the private life of the country's dictator.

Is nothing sacred?  Leaking a dictator's email? 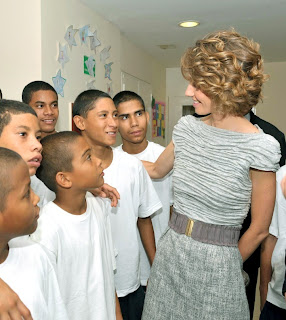 They appear to portray Mr Assad, 46, as a whimsical, light-hearted figure, apparently untroubled by his country's bloodshed. Meanwhile, Asma al-Assad, 36, seems to spend many hours shopping online and searching out the latest Harry Potter DVDs, presumably for the couple's three children. 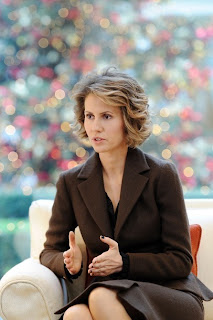 On February 5, at the outset of the assault on Homs that escalated to become the bloodiest episode of the country's conflict, Mr Assad is purported to have sent his wife the lyrics of a song by Blake Shelton, the American country and western singer.

Asma Assad is quite an icon, by my lights.  Over a year ago, I did a rip off post (Thanks again, Maggie!) on dictators wives, including Asma.  At the time, getting some 50 hits a day or so, it sank like a stone.  A few months later as the revolution in Syria heated up, it became a very popular post, at one time my most popular overall, with the vast majority of hits coming from Google on Asma or some variation thereof. 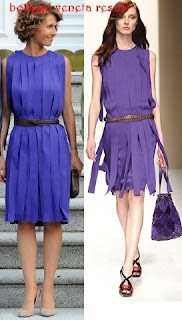 In recent months, that honor goes to an equally shallow and worthless, but less deadly woman, Shannon Tweed of Playboy and marrying Gene Simmons fame.  However, in the last few days, a second Asma post has heated up considerably, proving, I suppose, that women have an insatiable for news from worthless celebrities, at least if they're thin, good looking, and married to rich, powerful men.  I know it isn't teenage boys coming to look for these pictures.

It has to suck to be a shallow, fashion whore whose husband's regime is likely to end badly in the near future, possibly ending in his exile or even death, like Saddam Hussein Obama.  But that's what happens when you marry a rich, ruthless dictator.  When life is good, it's very, very good, and when it's bad it's awful...


Jake Finnegan links this with his Burkalesque Babe of the Week, Lena Hellqvist.
Posted by Fritz at 6:00 AM