A Bit of Sanity in the 9th Circuit Court

On Tuesday, Federal Judge Louis Guirola Jr., in the Southern District of Mississippi, dismissed the case of Comer vs. Murphy Oil for lack of standing. Gulf Coast property owners had sought to hold a grab bag of energy companies responsible for damage they suffered from Hurricane Katrina in 2005. The plaintiffs claimed the power companies knowingly had endangered them by emitting unsafe levels of carbon dioxide. The case was dismissed in 2007, then resurrected by the 5th Circuit Court of Appeals in 2009. The latest ruling should put an end to it. 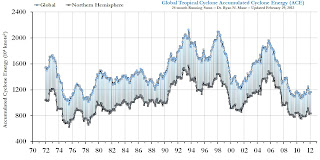 It was an absurd suit to begin with.  If anything, Hurricane activity has been lower in recent years than the historical average, suggesting that anthropogenic global warming climate change, if it exists, may actually reduce tropical storms and hurricanes.  Moreover, the contribution of "Murphy Oil" to the increased CO2 that allegedly caused the hurricane is trivial compared to all the other sources, and the plaintiffs would have burned petroleum and contributed to CO2 increases as well, generating a defense of contributory negligence.


The judge should have assessed fines, court costs, and punitive damages on the plaintiffs for filing such a clearly frivolous suit.

Found at Maggie's Notebook.
Posted by Fritz at 11:16 PM