I have had a few articles about stupid sex studies sitting around looking for an excuse.  Sex studies are at particular risk of being wrong because 1) sex sells and 2) scientists are very quick to publicize the results of studies that seem contrary to common sense.  With that said, here we go:
Staring at naked people makes you smarter


Researchers at the University of Tampere and Aalto University showed volunteer men and women photos of models in varying stages of undress. Before all you women in sensible shoes cry “sexist pig!”, I hasten to add the models also were male and female. The volunteers’ electrical brain activity was monitored.

Results appear in the current edition of the science journal PLoS One.
...
Professor Jari Hietanen reports the less clothes the models wore, the quicker each volunteer’s grey matter kicked into action.  This may have roots in how our cave-man ancestor identified a potential mate. It was easier if they were naked.

This has significant consequences. It provides a rationale for posting pictures of less than totally clad women; hey it makes you smarter. It almost a duty. It also suggests a way to improve the value of "Jersey Shore"; by having the girls run around naked...  What, you say you don't want to see Snooky naked?  Me neither, but it's to reduce the stupidity induced by show: 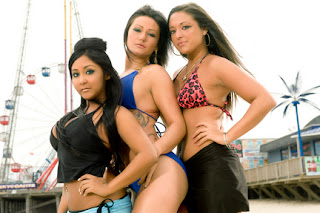 
In an experiment, volunteers were told to read a fake screenplay about a character they refer to as a "foolish soccer hooligan." (A subsequent finding of the study: Austrians are adorable.) The story describes a day in the life of a man named Meier: He wakes up, reads (and misunderstands) the message in an inspiration-of-the-day calendar, meets his friends in a bar and gets very drunk. Meier then goes to a soccer game, gets into a fight and comes home to crash; he sleeps through the next day. (Substitute the soccer game for a nightclub, and you have something very similar to the televised daily shenanigans of Snooki or The Situation.)


Some of the 81 volunteers were instructed to read a longer version of the "soccer hooligan" story, while others read a shorter version -- and the control group read a rather boring story in which Meier does nothing stupid. Then researchers gave the volunteers a multiple choice general knowledge test, including questions like, "What is the capital of Libya?" and "What kind of speed is expressed by the letter 'c' in physics?" and "Who painted La Guernica?"


About 54 percent of the women in the study reported they had faked an orgasm at some point in their relationship. This group also was found to harbor more suspicions about their partners' fidelity than were the women who said they hadn't faked any orgasms.

Kaighobadi said these women also were more likely to engage in what psychologists call "mate-guarding" behaviors. Such behaviors can range from simply dressing up nicely for one's partner to keeping tabs of where he goes and telling off other women who look at him.

"It seems that women who were more likely to pretend orgasm were also more likely to do a variety of these behaviors at the same time," Kaighobadi said.

So 54% of women (actually these were college women), admitted to faking an orgasm?  There's plenty of time to boost that number as they get more mature.


The research involved 96 male 103 female undergraduates, who were put through a "speed-meeting" exercise—talking for three minutes to each of five potential opposite-sex mates. Before the conversations, the participants rated themselves on their own attractiveness and were assessed for the level of their desire for a short-term sexual encounter. After each "meeting," they rated the partner on a number of measures, including physical attractiveness and sexual interest in the participant. The model had the advantage of testing the participants in multiple interactions.

Hey, if you don't try, you won't get any, right (speaking as a man). As for women?  What man wouldn't say that they tend chronically underestimate men's desires? I don't think they can understand; they simply lack that part of the brain.

And finally, sex addiction, that ultimate excuse for stupidity:

If Sex Addiction Exists Then so Does My Napping Problem

Sexual addiction is not a disorder recognized by the holy Bible of Psychology -- the Diagnostic and Statistical Manual of Mental Disorders (DSM). There is verbiage proposed in the new edition of the manual to include behavioral addictions, including pornography addiction, Internet addiction, but alas, no nap addiction. Guess I'm out of luck.

Even without the official diagnostic criteria, unlike other behavioral compulsions, sex addiction has a documented, researched history. So why isn't it recognized by the DSM? For one, it's an old book (written in 1994), and the research regarding sexual addiction has been more front-and-center over the last decade. I'd guess that some of the old-school button-up don't-talk-about-sex attitude is also to blame. After all, it SOUNDS like a bullshit diagnosis. I don't (as racy as it sounds) think it is a bullshit diagnosis, really. I firmly believe that any behavior that is taken to the extreme can be considered pathological. If a disorder, like sex addiction, "causes clinically significant distress or impairment in social, occupational, or other important areas of functioning" (the reliable words surrounding ALL diagnoses in the DSM), it's probably worth sussing out.

I'm addicted to breathing, eating sleeping and drinking, too...

Thanks to Wombat-Socho for listing this, and my other posts in this weeks Rule 5 compilation "Boxing Day Edition" at the Other McCain.