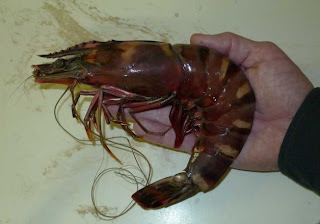 Giant shrimp raises big concern as it invades the Gulf


A truly jumbo shrimp is causing big worries about the future of the Gulf of Mexico's ecosystem.

The Asian tiger prawn, a foot-long crustacean with a voracious appetite and a proclivity for disease, has invaded the northern Gulf, threatening prized native species, from crabs and oysters to smaller brown and white shrimp.

Though no one is sure what the ecological impact will be, scientists fear a tiger prawn takeover could knock nature's balance out of whack and turn a healthy, diverse marine habitat into one dominated by a single invasive species.

"It has the potential to be real ugly," said Leslie Hartman, Matagorda Bay ecoystem leader for the Texas Parks and Wildlife Department. "But we just do not know."

Looks like it's about time to put another shrimp on the barbie.  I won't be concerned until they start catching them on "Big Shrimpin'."