How Does Chinese Food Differ from German Food?

As Mao Tse Tung said to Henry Kissenger, "I like German food, but an hour after I eat it, I'm power hungry again". 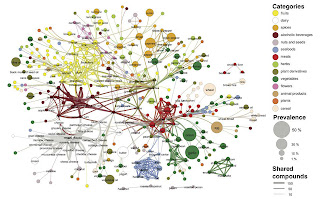 
Nature has published a fascinating paper that solves a seemingly silly but very interesting question: why do Western and Asian foods taste so different? After analyzing 56,498 recipes the answer is in the way they pair 381 ingredients.

This is the first time that a experimental study has confirmed what only was an hypothesis over the past decade:

This food pairing hypothesis has been used to search for novel ingredient combinations and has prompted, for example, some contemporary restaurants to combine white chocolate and caviar, as they share trimethylamine and other flavor compounds, or chocolate and blue cheese that share at least 73 flavor compounds.

However, since Asian food works by avoiding food pairs, their analysis also destroys the idea that flavor pairing is the only way to achieve amazing new plates. According to the study, this "discovery of patterns that may transcend specific dishes or ingredients" may open new ways to cook.

We found a pretty good new cheap Thai restaurant in Prince Frederick the other night...