A detailed description of a fossil that scientists identify as a varanopid "pelycosaur" is published in the December issue of Naturwissenschaften – The Science of Nature. Professors Sean Modesto from Cape Breton University, and Robert Reisz from the University of Toronto Mississauga, provide evidence that a group of ancient, agile predators called varanopids survived for more than 35 million years, and co-existed with more advanced animals...

"These animals were the most agile predators of their time, sleek-looking when compared to their contemporaries," says Reisz. "They seem to have survived a major change in the terrestrial fauna that occurred during the Middle Permian, a poorly understood extinction event in the history of life on land."

According to Modesto, "These ancient animals really looked like modern goannas or monitor lizards, but are actually more closely related to mammals."  The fossil revealed teeth that are strongly flattened, curved towards the throat and with finely serrated cutting edges typical of hypercarnivores - animals with a diet that consists of more than 70 percent meat. Modesto and his colleagues concluded that these varanopids had a longer co-existence with animals that eventually evolved into mammals than previously believed. They suggest that the dental and skeletal design of varanopids, reminiscent of the Komodo dragon of today, may have contributed to their long survival and their success.

Let's see what the Dino Babes have to offer: 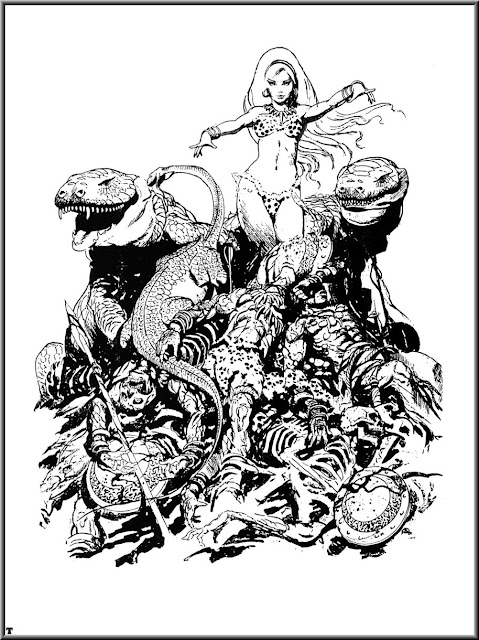 Not too close, but he got the Komodo Dragon look in there.
Posted by Fritz at 4:00 AM