The Beach on Christmas Eve Eve. 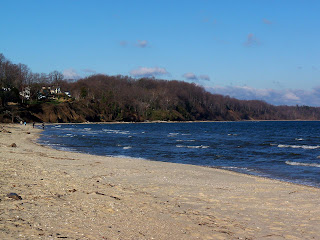 After yesterday's cloudy skies we had a rainstorm last night, including a few flashes of lightning and some thunder.  As often happens, after a storm we had nearly clear skies this morning, and a bit of wind, just enough to keep my hat unstable.  It was only about 50 F but the sun kept us pretty warm. 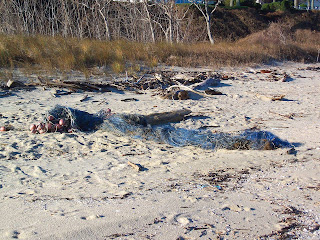 Sometime in the past week, an old gill net drifted up on the beach. From the size of the barnacles on the floats, it has been in the water since last winter.  It did not seem to have any fish stuck in it, but according to Ray it had been collecting Sassay Shad for quite a while.  When we returned back from the walk, another beach rat had dragged up to the parking lot in anticipation of scapping it. 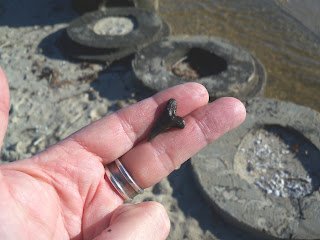 Fossil hunting was slow due to the wave action.  I finished with 14 teeth, including this good sized, but rather worn Snaggle Toothed sharks lower tooth. 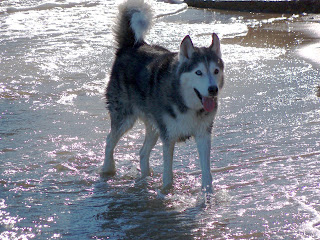 Although obviously limping around all morning, Skye was still hot to get out. 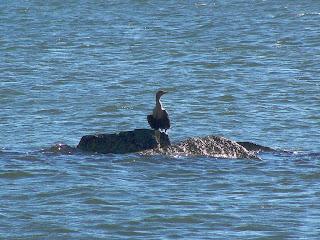 No eagle today; it was not in evidence in its usual haunts.  However, we had a cormorant hanging out on the jetty, so I got a photo of it.  It's a little hard to take the picture into the sun, but by playing with "curves" in GIMP, I got some of the detail on the bird to show.
Posted by Fritz at 1:16 PM