No, the Rich Don't Keep Getting Richer 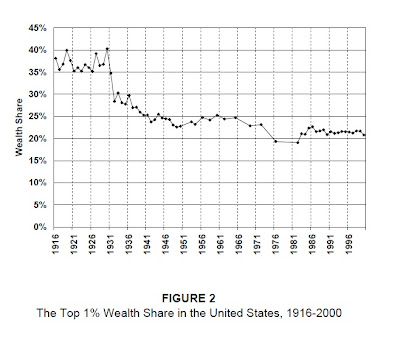 According to the MSM and liberal economists, U.S. inequality has exploded to levels not seen since the 1920s or perhaps even the Gilded Age of the late 19th century. And to prove their point—that the 1 percent has gotten amazingly richer in recent decades—the inequality alarmists will inevitably trot out a famous income inequality study from economists Emmanuel Saez and Thomas Piketty. But why not instead look at wealth—all financial and nonfinancial assets—instead of income? It’s less volatile and a truer measure of all the economic resources at an individual’s command. Turns out that Saez has done research on that subject, too. And he even created a revealing chart documenting the ups and downs of U.S. wealth over the past century. It reveals a very different picture of inequality in America:

So how does that happen; the upper 1% of income earners make more, but overall the upper 1% of the wealthy have been rather steady recently at around 21% of all wealth? Among other things, having an income in 1 year that puts you in the upper 1% doesn't guarantee that you'll make the same amount of money next year, or that you will be smart wise enough to convert that one time income windfall into wealth.  Ask M.C. Hammer...