Caches of tools and animal remains from around 12,000 years ago, found on islands off the California coast, have given remarkable insight into the lives of the first Americans.

The finds show fine tool technology and a rich maritime economy existed there.

The tools vary markedly from mainland cultures of the era such as the Clovis.

The finds, reported in Science, also suggest that rather than a land route to South America, early humans may have used coastal routes.

A team studying California's Channel Islands, off its southern coast, has found that the islands show evidence both of differing technologies and a differing diet, even among the few islands.

"On San Miguel island we found a lot of pretty remarkable tools, but the animal materials there were largely shellfish," said Torben Rick, an anthropologist from the Smithsonian Institution in Washington DC.

"Over on Santa Rosa, that site was dominated by bird remains and a few sea mammal and fish remains... and no shellfish at all.

"What's interesting about that is it shows us not only were these people out there living a coastal life, but they were taking advantage of the full suite of resources available to them; they had a very diversified maritime economy." 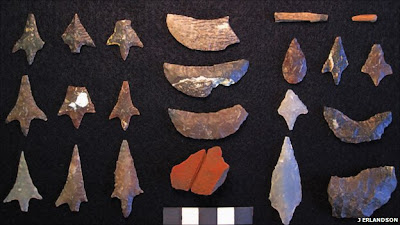 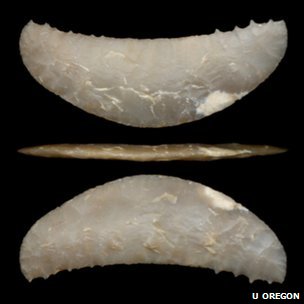 This is way cool.  The popular view of the early settlement of the Western Hemisphere is that large mammal chasing proto-Indians crossed the Bering Strait, and proceed to occupy the North American continent with the short lived Clovis culture and it's successors.  Recently, as science goes, an alternative, or perhaps complimentary theory has been advanced, that some pre-Clovis cultures came along the coastlines, living a more coastal centered life, and rapidly colonized the coastline of North and South America, and may have contributed significant diversity to the populations that ultimately settled the Americas.  This find would seem to me to support that hypothesis.