Isaac on Track for New Orleans

New Orleans Under Hurricane Warning, But Will “Shelter In Place” 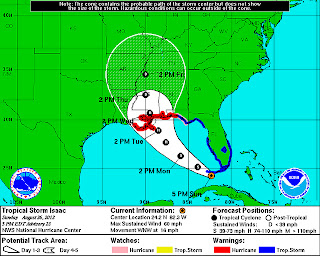 Last night, I noted that a single model showed Hurricane Isaac hitting New Orleans at Category 3, making it potentially as damaging as Hurricane Katrina back in 2005.  Today's models have shifted  the consensus track westward to a point that predicts landfall in the vicinity of New Orleans.

New Orleans Mayor Landrieu announced that no evacuations would be ordered, and that the inhabitants of New Orleans will be expected to "shelter in place."


With Tropical Storm Isaac expected to strengthen, New Orleans Mayor Mitch Landrieu has declared a state of emergency and urged residents to begin preparing their homes as shelters through the storm. Landrieu said the storm is moving along at about 16 miles an hour, and if it stays at that pace, it could reach the city in the next 34 hours, putting it ashore late Tuesday or early Wednesday. Landrieu emphasized that there will be no shelters of last resort, so people need to be prepared to evacuate, should it come to that.

If it were me, I'd already be looking at options well away from New Orleans.  I hope New Orleans is better prepared than they were in 2005.  I have a bad feeling we might find out soon.
Posted by Fritz at 8:58 PM