Around 12 percent of pale grass blue butterflies that were exposed to nuclear fallout as larvae immediately after the tsunami-sparked disaster had abnormalities, including smaller wings and damaged eyes, researchers said.

The insects were mated in a laboratory well outside the fallout zone and 18 percent of their offspring displayed similar problems, said Joji Otaki, associate professor at Ryukyu University in Okinawa, southwestern Japan. 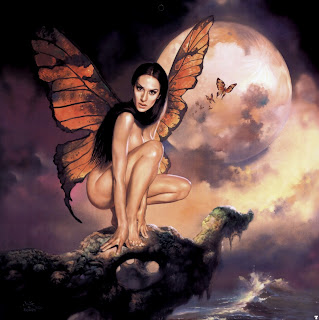 Given the Japanese obsession with gigantic, monsters caused by radiation (Godzilla), a humanoid butterfly just seem so obvious...


That figure rose to 34 percent in the third generation of butterflies, he said, even though one parent from each coupling was from an unaffected population.

The researchers also collected another 240 butterflies in Fukushima in September last year, six months after the disaster. Abnormalities were recorded in 52 percent of their offspring, which was "a dominantly high ratio", Otaki told AFP.

Otaki said the high ratio could result from both external and internal exposure to radiation, from the atmosphere and in contaminated foodstuffs.

I suppose butterflies make a pretty good sentinel species for radiation damage in the wild.  Fast growing, their caterpillars eat green vegetation apt to be both contaminated from atmospheric sources and from contaminated soil, and this get a dual dose; fortunately the exposure for people appears to have been much less:


Japanese researchers have found very low amounts of radioactivity in the bodies of about 10,000 people who lived near the Fukushima Daiichi power plant when it melted down.

The first published study that measured the radiation within a large number of residents reassured health experts because the numbers reported imply only negligible health risks. The threat appeared to be considerably lower than in the aftermath of the Chernobyl accident, the experts agreed.