Curiously, this article is entitled Our View: Climate change denial doesn't hold water
implying that it's about global warming, but in fact, what it is all about rising sea levels in the Chesapeake Bay.  While the two are linked in the public minds, they are very different.

People who live inland on the Delmarva Peninsula may still argue that sea level isn't rising or that global warming isn't happening. But they're either in denial or not paying attention. Those who live along the various shorelines of Delaware, Maryland and Virginia are watching as it unfolds. Scientists tell us not only is sea level rising, in part because of polar glacial melt, but Delmarva is slowly sinking at the same time. Islands in the Chesapeake Bay and other bodies of water that surround the peninsula are literally disappearing. 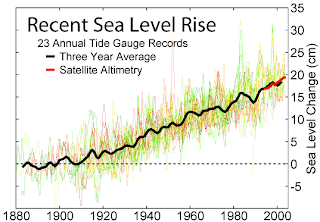 I agree with all the above, however, you have to be forced to acknowledge that up to this point, sea level rise is on the same pace it has been for approximately the last 100 years, and claims that it is accelerating due to man made climate change are premature at best:


In Virginia, it's been happening for some time. People have been trying to develop Cedar Island, a barrier island near Wachapreague, since the late 1800s. But Cedar Island is having none of it. In the 1980s, the last of a series of development schemes resulted in 27 homes located on the island's ocean side. In 1997 they were on oceanfront property; today, all that remains are a few scattered clusters of underwater pilings. Plans for earlier developments remain filed away in a Virginia Marine Resources Commission office in Belle Haven. The Atlantic coast of Cedar Island is eroding away at the phenomenal rate of 13-17 feet annually. Development is not an option. VMRC Chief Engineer Hank Badger, after decades of watching and monitoring Cedar Island, has come to the conclusion Mother Nature wins every time. 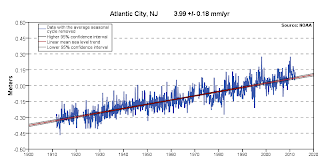 Yes, structures built on sand bars in the ocean must be considered short-term investments, in the long term, all such islands tend to migrate with sea sea level.  As sea level rises (as it has for past 13,000 years since the bottom of the last ice age), the island march in tandem with the shoreline.  You can armor a barrier island against such movements, but at a cost.  It requires a continual input of sand and work, and you loose the natural character of the barrier island that was the reason you built there in the first place


Maybe, but Ocean City is olding its own so far. Maryland's seaside resort has been smart enough to develop a long-term plan that includes beach replenishment every four years and maintaining a healthy dune system as a buffer. It has cost $250 million, but it has prevented more than $250 million in damages. Flooding still takes place on a regular basis, but property damage is almost unheard of. The replenishment has kept Ocean City's sand from shifting; it no longer lines up with Assateague Island, where no replenishment has taken place. And that means the resort's pricey real estate is safe -- for the time being.

That's what I just said.  Atlantic City is not moving, but Assateague is; just like it should.


Crisfield is in much the same predicament. It's not a barrier island like Ocean City, but the smaller barrier islands that protect it are washing away before the very eyes of Crisfield residents. A Mount Vernon resident has a photo of himself and his dog standing next to a tree on his property; it was taken in 2001. Today that tree is surrounded by water. Smith Island and Deal Island are equally vulnerable.

Indeed, in the long run, in the absence of massive revetments to protect the shorelines, Deal and Smith Islands are doomed.  While their marsh may accumulate surface rapidly enough to stay above the sea level rise, as salt marshes tend to do when allowed to, the islands will erode at the edges, following the fate of Sharp's Island further north.


It's not just property that's at risk. Encroaching sea water is salty, and once it infiltrates agricultural land, Delmarva's traditional corn and soybean crops will no longer grow. Scientists are working to develop salt-resistant crops. One that shows promise --seaside mallow -- is being studied closely. 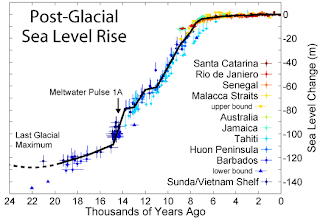 Sure, find a crop that can grow in nearly full seawater, and produce a valuable crop, and you've managed to put off the problem for another 10-30 years.  But eventually, the sea will win.


According to the Federal Emergency Management Agency, there are four ways to deal with sea-level rise: spend a lot of money to maintain shorelines (Ocean City is doing this); adapt and plan for erosion, but forestall it where possible (Crisfield is basically doing this); retreat (Cedar Island is an example of this approach); or do nothing.

One thing seems certain: If we adopt the fourth approach, our grandchildren will either be living on houseboats or wondering where their ancestral homes went.

It's happened before.  10,000 years ago, mankind had settlements out on America's continental shelf .  As the ice melted and the sea rose, those people retreated away with the rising sea.  They did not have the hubris to imagine they could do anything about it.