Eastern Shore Not So Wild About Saving the Bay, Either

It is a law igniting controversy in counties all across Maryland, especially on the Eastern Shore. What is known as the "Septic Bill," which passed this legislative session, includes a four-tier system dictating where septic systems are allowed. Many counties now find themselves scrambling to meet this December's implementation deadline, and farmers say they are the ones being hurt most.

Gov. Martin O'Malley calls septic pollution the fastest growing cause of nitrogen pollution in the Chesapeake Bay. Supporters of the bill say it will help curb that. Others argue the bill will just add thousands of dollars to the cost of new homes and greatly devalue farm land.

Coulbourne Swift is a life-long farmer; his life's work is laid out over more than 3,100 acres of land from Marion Station to Westover. The state's septic law greatly limits how much he can divide those acres, if he chooses to do so. "It's going to take away the value from my land and the rights, I won't be able to develop it. If I give away one lot to a grandchild, that stops all development on any parcel that I own," Swift said.

According to O'Malley, the bill will "prevent 50,000 new septic systems and stop as much as 1.1 million pounds of nitrogen pollution from being pumped into surface water by 2035."  Supporters say it is a vital piece of legislation. 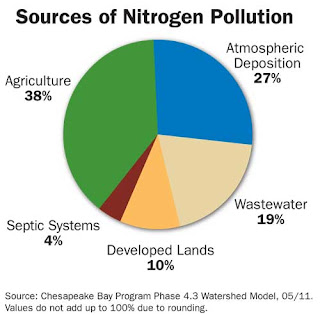 "I think it's better for the environment," noted Robert Burns. "Anything that would save the bay. I think they can handle it if they work it right because the bay is a wonderful place and I'd hate to see it all polluted up."

But farmers like Swift do not think punishing farmers is the right way to do it. "They're not looking at the pollution source," Swift explained. "They're looking at, it's like when you're bleeding to death, your throat's cut, they want to fix your toe. The urban sewer plants, I feel, is the problem and they need to fix them, because they're the ones that are polluting the bay." 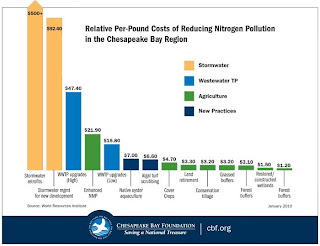 Currently, septic systems are estimated to contribute about 4% of the current nitrogen loadings to Chesapeake Bay (according to Chesapeake Bay Foundations - I believe I have seen numbers as high as 7%). That makes it one of the smaller contributors to the nutrient problem in the Bay.

Why cause massive disruptions in the economics of the eastern shore to prevent a minimal part of the problem from expanding slightly?

It's part of the war on the suburbs.  O'Malley's political strength comes from the urban centers in Maryland, and by forcing growth into the cities he hope to grow the democratic base.

By far the most dollar effective way to prevent nutrient pollution into the Bay is controlling urban storm water (see above) and waste water treatment plants.  But that impacts the cities more, and while it is being done, much of it is being underwritten by the states and the feds.
Posted by Fritz at 7:10 PM