Sharks, There's an App for That

Just in time for Shark Week, an App that lets you track Great White Sharks in the wild:

ABC News reports a team of marine biologists have deployed a self-propelled Wave Glider robot off the coast of San Francisco that listens for and tracks white sharks.

But the robot is only one piece of the high-tech puzzle: an app for iPhone and iPad lets everyone, non-marine biologists and marine biologists alike, see the information the robot is collecting about the sharks. The Shark Net app provides images, sounds, and video of white sharks off the coast of California.  Over 4,000 tags have been placed on animals across the Pacific, including sharks, tuna, and whales. 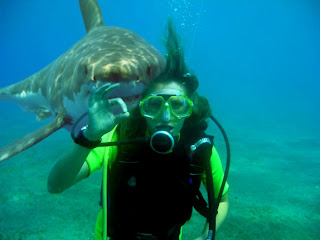 The new Wave Glider joins a number of fixed buoys that have been picking up the signals from those tagged animals. "The Wave Glider is moving along on a fixed trajectory. If there is a tagged animal within 2,400 feet it will hear that tag and it will relay that information to our ground station," Stanford professor Barbara Block told ABC News.

if you have the Shark Net app on your iPhone or iPad. The iOS app's interactive map lets you see the location of the sharks in respect to the buoys and the Wave Glider.

Why you would want this app on your smart phone or IPad is beyond me, but if you have a reason, there's the link.
Posted by Fritz at 11:19 PM