Whatever they're for, I'm against; Keep the Protest Alive!  (NSFW link), at least as long as they keep that soulless ginger as the lead marcher...  Hmm, as near as I can see their protesting their inability to go topless by going topless.

And just in case the link goes dead, here's the first photo (NSFW link).  It's also worth going to Althouse to see her post and the comments.  A taste:


Warning, lots of large photos of breasts at the link, which I recommend not for the usual gawking at breasts, but for the careful contemplation of the expression and demeanor of the various women. The pictures tell a story, and each woman is different — not just in the size and shape of her breasts — but in her attitude about joining this demonstration... and the way that attitude evolves as the demonstration progresses and as the various women perceive the differences in breasts and attitudes of the other women.

Not bad; so much better than San Francisco, but not quite as good as Femen (on average).

It's a rare day I regret I don't work in the city.

Oh heck; just because it's real news story, and local... 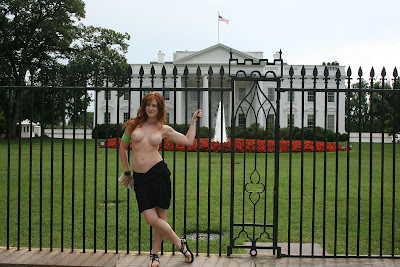 Wombat-Socho delivers the big Rule 5 list at the Other McCain "Rule 5 Sunday: Like A Rock."
Posted by Fritz at 7:44 PM