The change in weather seems to have brought a change in the butterfly fauna on the Joe Pye Weeds at work; either that, or simply a change with the changing seasons  The number of Swallowtails of all types seems much less, and a few new ones seem to be showing up.  Today I'm featuring a Common Buckeye (Junonia coenia).

The bold pattern of eyespots and white bars on the upper wing surface is distinctive in much of its range, though compare related species in the same genus. These are Mangrove Buckeye (Junonia evarete) and Tropical Buckeye (Junonia genoveva), formerly considered one species, and the Smoky Buckeye (Junonia evarete). The eyespots likely serve to startle or distract predators, especially young birds. The species has many flights throughout the year, with mostly northward migrations for the summer. Much of the northern United States is only colonized in the fall from southern populations. Some of the later broods move southwards in the fall. Common Buckeyes exhibit seasonal polyphenism, the summer version of the butterfly has light yellowish ventral wings and is called "linea". The Fall morph has pink ventral wings, and is called the "rosa" morph. 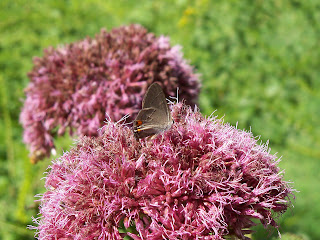 Another common, but difficult to photograph, and identify visitor to the garden.  I tentatively identify this as a Gray Hairstreak, (Strymon melinus), although once before I ID'd it as an Eastern Tailed Blue.  The markings fit the Gray Hairstreak a little better though.  It is gray on top, from the few glimpses I actually get.
Posted by Fritz at 8:44 PM