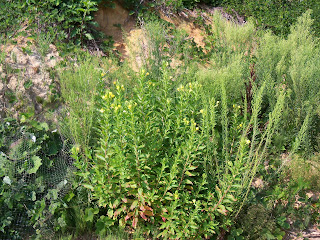 I think.  Two weeks ago I photographed a flowing plant that has been showing up in great abundance at the beach lately.  I didn't have a good ID, but Georgia brought a piece home this weekend, and went through the books, and we think we have it sussed out:

It's called Evening Primrose because it's flowers open in the evening, and close by noon the next day (it's also not a true primrose). 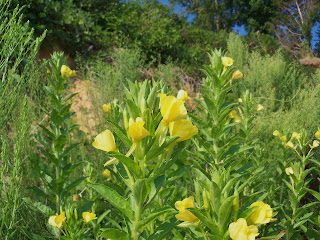 This native biennial plant can be 8' tall, although it is often shorter. There is usually a central stem with alternate leaves, but sometimes there will be multiple stems in open areas, creating a bushy appearance. The stems are light green or red, and are covered with white hairs. The light or olive green leaves are up to 8" long and 2" wide, but usually smaller. They are lanceolate and resemble willow leaves. The margins of the leaves are smooth or slightly dentate, and are nearly hairless. Smaller secondary leaves often appear at the axils of major leaves on the central stem. A panicle of pale yellow flowers occurs at the apex of the plant (or at the ends of major stems, if the plant is bushy). Each flower is about 1" across when fully open, with 4 petals and prominent stamens, and a long green calyx. The flowers remain open from evening to early morning, but will remain open longer on cloudy days. They have a mild lemony scent, and bloom from mid-summer to fall on mature plants. Long narrow seedpods develop, which split open from the top to release many tiny, irregular brown seeds. They are small enough to be dispersed by the wind, and can remain viable in the soil after 70 years. The root system consists of a fleshy taproot.

I speculated that when we identified it, it would turn out to be an invasive species from elsewhere.  I was wrong, it's native to our part of North America and likes the kind of environment the beach and cliff provide:


Disturbed areas are favored in both natural and developed habitats, including mesic to dry black soil prairies, sand prairies, thickets, glades, lakeshore dunes, abandoned fields, roadsides and railroads, slopes of drainage ditches, vacant lots, etc. Sometimes this plant is cultivated in wildflower gardens, from which it may escape.

We might have to collect some seeds and try it, as it is attractive to some sphinx moths: