I Almost Have the Whole Set

For the past few weeks, as you may be aware, I've been on a kick of trying to get pictures of butterflies, in particular, the dark swallowtail butterflies that seem to be so common (and confusing) this time of year.  So far, I've succeeded in getting the Spicebush Swallowtail, the black morph of the Eastern Tiger Swallowtail, and a non-swallowtail look-alike, the Red Spotted Purple.  Today I added another to the list, the Black Swallowtail (Papilio polyxenes).  I caught a glimpse of one yesterday at the Joe Pye Weeds at work, but only got one blurry picture with enough characteristics for an ID.  I got a good set today:


From the faintness of the double row of yellow spots on the upper side of the wings, and the wider blue area, this is a female (this is a general pattern across the dark swallowtails).  However, what clearly identifies this as a Black Swallowtail is the red spots on the bottom of the rear wings.  In all the other swallowtails, these spots do not form complete bulls-eyes. 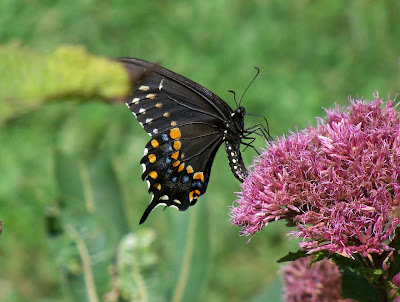 Just another impression.  This butterfly, where it's black, is really black; a dark velvety black.  The Spicebush butterflies I've seen are a less intense black, more of a very dark gray, and the blue on the back is more greenish (hence it's other common name, the Green-Clouded Butterfly). The black morph of the Eastern Swallowtails, especially in bright sunlight, show a trace of the tiger pattern of the more common yellow morph, and the black areas have a brownish cast.  This butterfly is also distinctly smaller than the Easter Swallowtail (there were lot's of them available on the bushes today for comparison).

On the underside, this butterfly has a double row of orange spots, like the Spicebush Butterfly, and unlike the dark morph of the Eastern Swallowtail.  However, it lacks that Spicebush "comet" mark in the upper row of orange dots.

At this point, I believe the only dark swallowtail (or look-alike) I'm missing is the holy grail, the Pipevine Swallowtail.  The Pipevine is reputed to be the excuse for so many other dark swallowtails.  By being poisonous and distasteful by virtue of the Pipevine it feeds on as a caterpilar, the butterfly has apparently encouraged other butterflies to evolve to look similar to deter predators.  It's interesting that at least around here, the look-alikes far outnumber the original.  I guess there must be considerable power in that poison.