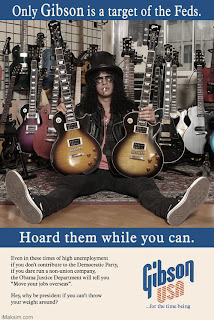 
Gibson Guitar Corporation has agreed to pay $350,000 in penalties to settle federal charges that it illegally imported ebony Madagascar to use for fret boards, ending a criminal investigation that had drawn fire from conservatives as an example of over-reaching by the government, the Justice Department announced on Monday.

The guitar maker agreed to pay a $300,000 fine and to donate $50,000 to the National Fish and Wildlife Foundation to promote the protection of endangered hardwood trees, like ebony and rosewood. In return, the government deferred prosecution of the company for criminal violations of the Lacey Act, which since May 2008 has made it illegal to import wood that was harvested and exported illegally under another country’s laws...

Bear in mind the policy is not about saving endangered species, but rather "social justice", the notion that the job of finishing the wood that's already been harvested should be done by the native labor.


Gibson said the shipments were legal and disputed the government’s interpretation of Indian and Madagascar laws, which the company maintains allow the exportation of “fingerboard blanks,” which are in essence a piece of hardwood cut to the dimensions of a guitar fret board. But federal officials defended the raids, saying the company had failed to comply with the Lacey Act and its officials had willfully turned a blind eye to evidence the exports were in fact illegal.

The settlement announced on Monday is a compromise that frees Gibson from the criminal charges as long as the company doesn’t violate the agreement over the next year and a half. As part of the deal, Gibson agreed to withdraw a suit seeking to recover about $261,000 worth of ebony and rosewood that was seized during the investigation.

The cost of fighting such actions by the feds could rapidly exceed the settlement costs, so it only makes sense for the business to settle.  It is not an ideal way to dispense justice, however.

So the administration drives a few hundred more jobs overseas, and, oh so coincidentally, hurts a company that contributes to the GOP, and helps it's competition (Martin Guitars), who just happens to donate to the Democrats.


Previous posts on Gibson's problems with the feds:

The Rally for Gibson

Are You Resigned to the Mexi Paul?

Two masters of the guitar, Les Paul, the inventor of the electric guitar, for which the Les Paul guitar line is named, and Chet Atkins. I appreciate the "spat" about guitar brands at the end...

Wombat-Socho checks in Sunday evening with  "Rule 5 Sunday: Outskirts", the canonical list of Rule 5 posts.  The Classical Liberal links with Rule 5 Candy.
Posted by Fritz at 6:00 AM