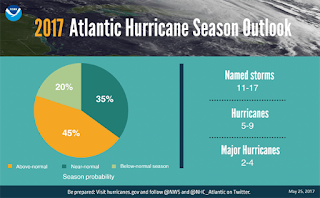 NOAA: Above-normal Atlantic hurricane season is most likely this year

These numbers include Tropical Storm Arlene, a rare pre-season storm that formed over the eastern Atlantic in April.

Now that's an almost useless prediction. No matter what happens, they have it covered. It may be right, but it doesn't provide much guidance. Time to start getting ready.
Posted by Fritz at 7:04 PM