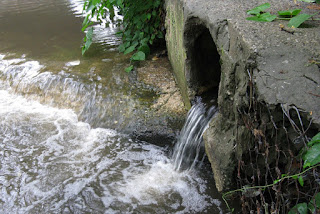 Turning stormwater runoff into a commodity,

A possible way to turn stormwater runoff into a commodity rather than a problem was unveiled during the Virginia Rural Coastal Economic Summit held last Friday at the Virginia Institute of Marine Science.
. . .
The concept involves turning the stormwater problem on its head and looking at it as a resource rather than simply as a problem. If rural communities can collect stormwater runoff, clean it, impound it, and create storm banks, said Lawrence, the clean water could be used to sell clean water credits to urban communities to offset their own higher environmental impacts. Any such program could potentially earn money for a private business or even for a locality, he said. 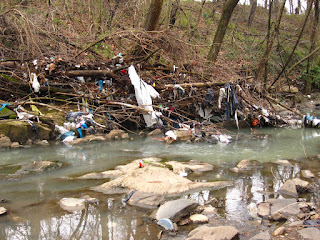 “We need to implement water quality programs and get money for staying blue and green,” said Lawrence. “We’ve got so much water coming off the roads that we can have an endless supply we can clean … Nobody’s being regulated to clean that water; we’re just dumping it into the Chesapeake Bay.”

Lawrence said that, with an average of 46 inches of rain falling per year in the region, just one mile of 20-foot-wide VDOT-managed public roadway could yield three million gallons of untreated water annually. An area with 200 miles of roadway would therefore have the potential of collecting a whopping 600 million gallons of dirty water a year.

“If we do a billion gallons of clean water, it’s got to be worth something to the state,” he said. “It would allow directed growth in areas where you really want to have it.”

An interesting idea. I like any pollution control method that encourages the cleanup through incentives rather than by penalizing users, and I like the idea of getting the cities to pay. Stormwater control is one of the most expensive forms of pollution abatement.

My problem with it is that not all pollution is equal. Cleaning up rural areas won't help a place like Baltimore Harbor or Elizabeth River all that much, since most of its stormwater problems arises from the city. Having rural folk make clean water cheap won't do a damn thing to make Baltimore Harbor any cleaner.

But I guess I like the idea of taking their money anyway.
Posted by Fritz at 4:07 AM