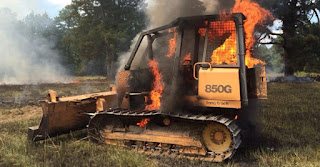 
You wouldn’t know it from the coverage by the major media but there have been numerous acts of sabotage including arson directed at the Dakota Access Pipeline over the past year. The lastest one happened Thursday in Newell, Iowa. The Pilot Tribune reports it caused nearly $150,000 in damage:


A fire on a Dakota Access pipe-line site near Newell Thursday night has been ruled an arson.
About $70,000 damage was done to a contractor-owned skid loader that was set on fire, and $75,000 to pipeline equipment. The fire, in a field near 180th Avenue north of Highway 7, was reported around 9:20 p.m. Newell firefighters responded, sheriff’s officials were immediately called in to investigate. 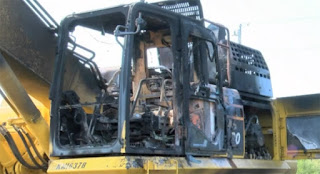 
Six different pieces of heavy equipment were set on fire at 640th Street, a short distance off Highway 7. Investigation is continuing – no arrests have been made yet, but local and FBI officials are looking into whether there may be ties to other Dakota Access arsons elsewhere in the state, Buena Vista County Sheriff Kory Elston said.
Four excavators valued at approximately $400,000 each were considered a total loss, and a $600,000 bulldozer and $400,000-$600,000 side boom were also damaged. 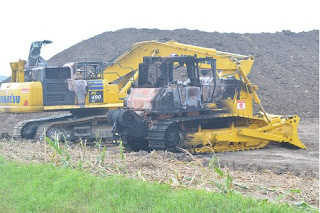 The incident was determined to be arson and the FBI was involved in the investigation, but no one was ever arrested or charged in the case. The November arson took place about 4 miles from the one that happened last week.

These are not the only incidents of arson connected to the pipeline project. Last October, fires were also set near Reasnor, Iowa, causing up to $2 million in damage. At the time, the company behind the pipeline offered a $100,000 reward for information on the arson. There had also been a previous arson incident in the same location in August.

In March of this year, the company that built the pipeline reported two incidents of sabotage in which someone used a blowtorch to burn a hole in a shut-off valve. One of the incidents happened in Iowa, the other in South Dakota.

There's a certain irony in using gasoline to start fires to protest carbon emissions.
Posted by Fritz at 5:20 PM