Dolphins in the Bay 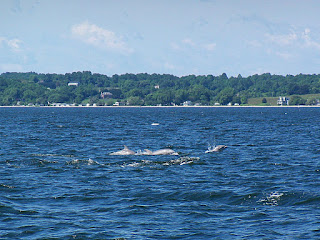 There Are Dolphins In The Potomac And We Know Almost Nothing About Them ... Yet

Barack Obama could be hanging out in the Chesapeake Bay. Dick Cheney and Jimmy Carter may be frolicking in the same Potomac River waters. Lyndon Johnson could conceivably be playing with Dolly Madison nearby. Did I mention these are all dolphins?

From a base near Ophelia, Virginia, Georgetown professor Janet Mann has been naming and getting to know the hundreds of bottlenose dolphins who call the Chesapeake Bay and Potomac River home for part of the year.

"There are a lot of questions. Are the same animals coming back? Where do they go? How stable are the groups? Who are they with? What are they feeding on?" Mann says. 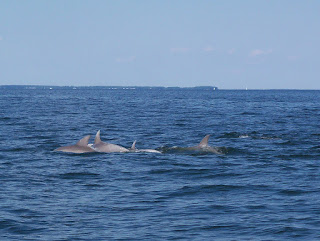 If I had to guess, I'd say they were eating Menhaden, which were present in big schools nearby. However, I doubt if they would turn down a Sea Trout or a Croaker if they encountered them. The spines on a Striper might be off putting.

Almost nothing is definitively known about the population. But she is working on changing that, conducting the first major research project on the dolphins of the Chesapeake Bay and the Potomac River.

"Other than a couple of newspaper articles, we have no literature to go on," says Mann, who has been studying bottlenose dolphins in Australia's Shark Bay for more than 30 years.

Although she's been flying halfway around the world each year for decades to study the marine mammals, it was still a surprise to learn that there are dolphins frolicking downstream from Georgetown.

"I’ve not met anyone who actually knew there were dolphins in the Potomac except for people who live right on the water," says Mann, herself included. It was only once she bought a house on the water that she came to learn about their existence.
. . .
Thus the Potomac-Chesapeake Dolphin Project was born, and Mann's place of respite became her new field of research.

Over the course of the first two years of collecting data, the team has identified more than 500 individual dolphins. Given that they're only sampling once a month in a relatively small area, the researchers believe that only represents a fraction of the total population.

Still, about a third of the animals they spotted in 2016 were repeats from the year before, meaning that some or even all of the dolphins are returning year after year. It's also becoming clear that this is a vital area for birthing and breeding.

"We know they’re giving birth in the Potomac and the Chesapeake; we see tiny babies just a week old or less," Mann says, noting that she sees far more newborns in these waters than in Shark Bay. Dolphins have a 12 month pregnancy (very convenient for research), and the researchers also see a lot of sexual activity.

A huge school of dolphins hunted in the upper Bay last year; we ran into them several times while fishing with Pete. I saw a couple briefly on Tuesday down in the islands.
Posted by Fritz at 6:02 PM