The Red Poppies of Italy 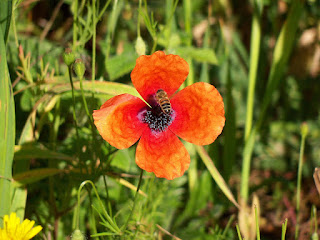 The first day we left Sicily, I started seeing red and orange poppies along the roads. They were probably in Sicily, too, but I may have over looked them. At any rate, I first became aware of them when we stopped at Popelia. I knew a little about the Red Poppies of Flanders, but I didn't stop to google:

The spring of 1915 was the first time that warm weather began to warm up the countryside after the cold winter at war in 1914-1915. In the region around Ypres in Belgian Flanders the months of April and May 1915 were unusually warm. Farmers were ploughing their fields close up to the front lines and new life was starting to grow. One of the plants that began to grow in clusters on and around the battle zones was the red field or corn poppy (it's species name is: papaver rhoeas). It is often to be found in or on the edges of fields where grain is grown. 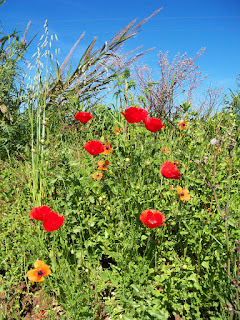 Perfect for a battlefield or a roadside. There were orange poppies too, but not as big or striking.


The field poppy is an annual plant which flowers each year between about May and August. It's seeds are disseminated on the wind and can lie dormant in the ground for a long time. If the ground is disturbed from the early spring the seeds will germinate and the poppy flowers will grow.

This is what happened in parts of the front lines in Belgium and France. Once the ground was disturbed by the fighting, the poppy seeds lying in the ground began to germinate and grow during the warm weather in the spring and summer months of 1915, 1916, 1917 and 1918. The field poppy was also blooming in parts of the Turkish battlefields on the Gallipoli penninsular when the ANZAC and British Forces arrived at the start of the campaign in April 1915.

In Flanders Fields by John McCrae


In Flanders fields the poppies blow
Between the crosses, row on row,
That mark our place; and in the sky
The larks, still bravely singing, fly
Scarce heard amid the guns below.

We are the Dead. Short days ago
We lived, felt dawn, saw sunset glow,
Loved and were loved, and now we lie
In Flanders fields.

Take up our quarrel with the foe:
To you from failing hands we throw
The torch; be yours to hold it high.
If ye break faith with us who die
We shall not sleep, though poppies grow
In Flanders fields.

I didn't know at the time that the red poppies were also featured in a song about WW II, Red Poppy Flowers on Monte Cassino

In early 1944 a German stronghold, dug in at the ancient Benedictine monastery atop Monte Cassino, had blocked the Allies' advance toward Rome. The forces of several Allied countries had attempted since mid-January to capture the German fortress. For a fourth major assault, which would begin on 11 May 1944, Polish troops were rotated in.

The song's melody was composed during the night of 17–18 May 1944 by Alfred Schütz, a composer, actor and member of the Polish Soldiers' Theater garrisoned at Campobasso in the shadow of Monte Cassino. Two opening stanzas were written at that time by Feliks Konarski ("Ref-ren" — "Refrain"), a poet and song-writer and soldier of the Polish II Corps commanded by Major General Władysław Anders.The third stanza would be written a few days later.

The third verse, Konarski wrote several hours later. In his memoirs, he wrote:
"For the first time singing Red poppies on Monte Cassino, we all cried. Soldiers cried with us. Red poppies, which bloomed over night, became one more symbol of bravery and sacrifice - a tribute of alive ones, whom for love of freedom died for freedom of people."