It can walk on land! It can breathe air! It will eat everything in sight!

The prospect of a predatory and toothy invader captivated reporters and gawkers for months in the summer and fall of 2002, making the peaceful west county suburb the center of a frenzied story. The tale of the walking fish garnered attention from as far away as Europe and China. Even Jon Stewart’s “The Daily Show” got into the act, with Stephen Colbert taking aim at the snakeheads. 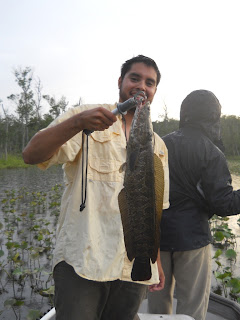 Maybe they should have called them "Chinese Herring" instead, to make them sound less threatening.  Capt. Mike Starrett, a friend, and guide in the Potomac River system, is trying to sell the name "Potomac Pike."  Gook luck with that, Mike!

A decade later, where the uproar began, there are no reminders of the Summer of the Snakehead. The privately owned pond where the fish were found sits behind a commercial complex on Route 3. These days, leaves are dropping off the trees into the calm waters. There are no more wanted posters for the snakeheads, no one selling T-shirts, no signs of all the drama. And while the snakeheads were eventually eradicated from the pond — the whole pond was poisoned by the state — they remain an ecological threat to the Chesapeake Bay system.

Snakeheads have colonized creeks up and down the Potomac River, and now they’re spreading into the main portion of the bay and finding more creeks to occupy. “I hate to be a pessimist, but we’re probably going to see them eventually in most of the tributaries to the bay,” Cosden said. 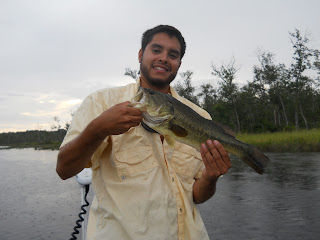 I think that's right. That genie is out of the bottle, for better or worse. Snakeheads are expanding their range and numbers in the Potomac River system, and occasional individuals are caught in odd places, including the Northeast River, the Rhode River, and Point Lookout.  I've even heard an unconfirmed rumor that one was caught in my own harbor this last summer.

The good news is, that to the extent the we can determine, the spread of snakeheads in the Potomac has been relatively benign.  No bait fish has been extirpated as yet, and the favored sport fish of the the tidal region, the largemouth bass seems to be holding it's own, at least so far. But as they say, only time will tell.
Posted by Fritz at 6:25 PM