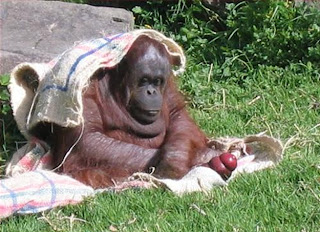 There comes a time in some men's lives when the days seem darker, mortality more certain, and the only sensible response is to blow the life savings on a sportscar.

Radical and often ill-advised changes in lifestyle have become the calling cards of the midlife crisis, but if it is more than a myth, then humans may not be the only animals to experience it.


Now an international team of scientists claims to have found evidence for a slump in wellbeing among middle-aged chimpanzees and orangutans. The lull in happiness in the middle years, they say, is the great ape equivalent of the midlife crisis... 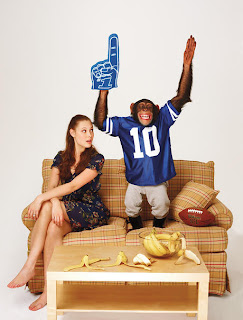 When the researchers analysed the questionnaires, they found that wellbeing in the apes fell in middle age and climbed again as the animals moved into old age. In captivity, great apes often live to 50 or more. The nadir in the animals' wellbeing occurred, on average, at 28.3 and 27.2 years old for the chimpanzees, and 35.4 years old for the orangutans.

"In all three groups we find evidence that wellbeing is lowest in chimpanzees and orangutans at an age that roughly corresponds to midlife in humans," Weiss said. "On average, wellbeing scores are lowest when animals are around 30 years old."

Damn, and I didn't even get anything for my midlife crisis...
Posted by Fritz at 5:00 AM