A Visit From Woody 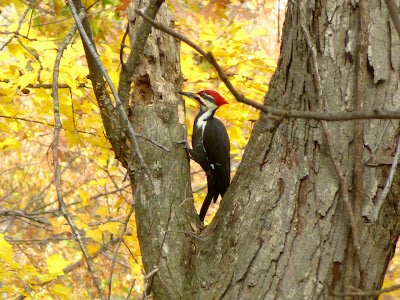 As seen out of the the back window today, a Pileated Woodpecker.  He/she was having quite a time hammering on the dead wood in this oak tree. Click to enlarge.


Woody Woodpecker is a funny animal cartoon character, an anthropomorphic pileated woodpecker who appeared in theatrical short films produced by the Walter Lantz animation studio and distributed by Universal Pictures. Though not the first of the screwball characters that became popular in the 1940s, Woody is perhaps the most indicative of the type.

Woody was created in 1940 by Lantz and storyboard artist Ben "Bugs" Hardaway, who had previously laid the groundwork for two other screwball characters, Bugs Bunny and Daffy Duck, at the Warner Bros. cartoon studio in the late 1930s. Woody's character and design would evolve over the years, from an insane bird with an unusually garish design to a more refined looking and acting character in the vein of the later Chuck Jones version of Bugs Bunny. Woody was originally voiced by prolific voice actor Mel Blanc, who was succeeded by Ben Hardaway and later by Grace Stafford, wife of Walter Lantz.