The futility of climate change mitigation

Last week, the Virginia-based Science and Public Policy Institute released a report showing, in chart form, the above results of Big Green's dream scenario. The SPPI study sports a cover graphic of a flaming dollar sign and a long title beginning "Analysis of US and State-by-State Carbon Dioxide Emissions," but readers are already just calling it "The Futility Report."

The report's author, Paul Knappenberger, made his assumptions "based on the [United Nations] Intergovernmental Panel on Climate Change (IPCC) Assessment Reports." He ran a scenario in which "the U.S. as a whole stopped emitting all carbon dioxide (CO2) emissions immediately," and found that "the ultimate impact on projected global temperature rise would be a reduction, or a 'savings,' of approximately 0.08°C by the year 2050 and 0.17°C by the year 2100--amounts that are, for all intents and purposes, negligible." Under this wild scenario, not only do the rest of the world's new emissions completely replace ours in just 6.6 years, but China's growth alone replaces them in less than 11 years. 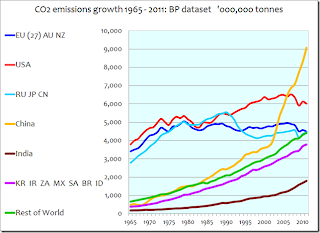 Yep, the math has been pretty clear for some time.  The amount of climate change the US alone is responsible for is vanishingly small (under the most optimistic, or is it pessimistic? assumptions), and the means proposed to stop it would be so counterproductive to our economy that there is essentially zero chance of the US following through, at least deliberately.

For what it's worth, the carbon output (footprint if you prefer) of the US has actually fallen in recent years, for two predominant reasons, first, the recession/Obama weak recovery have substantially suppressed the energy requirements of the US.  Second, the boom (and resulting low prices) of natural gas, largely as a result of fracking, has caused a significant shift in electricity production from coal to natural gas.