The war on nutria on Maryland’s Eastern Shore is poised to receive a fresh infusion of federal resources for a final push to eradicate the invasive rodent from marshland along the Chesapeake Bay.

U.S. Senate bill 3525, called the sportsman bill, covers everything from the price of duck stamps to the use of lead in fishing tackle. It includes $6 million for nutria eradication and control programs, $2 million of which is slated for Maryland over the next four years. The bill was poised to pass in the Senate on Monday evening, but may not make it through the House of Representatives before the December recess.

Since 2000, the U.S. Fish and Wildlife Service, the Maryland Department of Natural Resources, and a group of public and private partners have worked to trap and kill about 13,000 animals on more than 160,000 acres in five counties on the Eastern Shore. The effort is called the Chesapeake Bay Nutria Eradication Program.

“I have to say that the program is going extremely well,” said Jonathan McKnight, associate director of the Natural Heritage Program at DNR. “We’re seeing beautiful marsh recovery.” 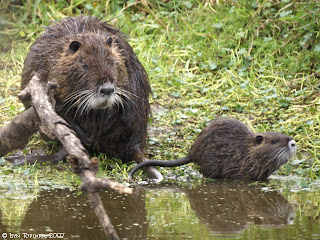 Aw, but they're so cute.  So what do you want, more cute, cuddly, fur bearing, edible rodents, or stinky, slimy marshes that nobody wants to go out into anyway?
Posted by Fritz at 6:38 PM