Is the Bay Foundation ignoring the threat behind the Conowingo Dam? 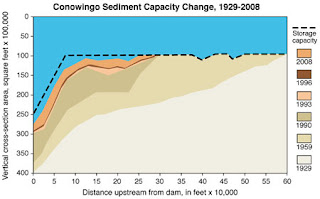 In August, the U.S. Geological Survey reported last year's Tropical Storm Lee contributed 39 percent of the sediment, 22 percent of the phosphorus and 5 percent of the nitrogen flowing through the Conowingo Dam over the entire previous decade. The report also states that there has been a 55 percent increase in phosphorus loading and 97 percent increase in sediment loading over the last 15 years as the reservoir behind the dam has filled with sediment and lessened the Conowingo's ability to keep pollution out of the bay. Given the heavy rains associated with Hurricane Sandy, we can only assume that the problem with excess sediment and nutrients in the Chesapeake Bay's main stem has gotten worse.

As Maryland has pushed bay clean-up efforts to the county level, the counties have begun to question the cost-effectiveness of a clean-up plan if major storms like Lee and Sandy can undo progress. In Cecil County, where I live, the estimated cost of compliance with the Environmental Protection Agency's pollution diet is $600 million. With such a hefty price tag, the counties deserve to know whether the science used to develop clean-up plans is the most effective available and that their efforts will not be in vain...

I think it's a pretty fair charge.  IMO, the Bay Foundation and several similar NGOs tend to act as lobbying organizations for the major governmental managers such as EPA (which, while officially forbidden from lobbying, have a pretty consistent message they manage to project).  NGOs are even invited to sue EPA to get court cases that the EPA would like to have heard, and even trained on how to go about about suing EPA by EPA itself!

The problem Conowingo Dam present is an enormous problem facing the bay, and one which the managers can't find a simple, cheap regulatory solution (which is to say, force someone else to clean up at the point of a gun).  It's a massive money pit, which will need to be born by a few of the jurisdictions involved, the feds, and a few states (Pennsylvania, New York, and Maryland), which nobody is in a hurry to address (at least with their own money).  On the other hand, they can easily go after the agricultural industries 15-20% of pollution relatively easily, by making the individual farmer do it.  If you crucify the first five, the rest of them will likely fall in line pretty quickly.  Even individual counties don't have the full power of the state to resist the power of the federal government to force them to do their part to clean the bay.

So CBF is predisposed to ignore the problem of the filling of Conowingo Dam, because it is not a priority with their client agencies.

That's not to say that agriculture can't contribute to the Bay clean up, but ever since I've arrived in the Chesapeake Bay region, managers have talking about the need to deal with the problem of Conowingo dam filling up.  Unfortunately, much like Mark Twain Charles Dudley Warner commented about the weather, everybody talks about it, but nobody does anything about it.
Posted by Fritz at 7:25 PM