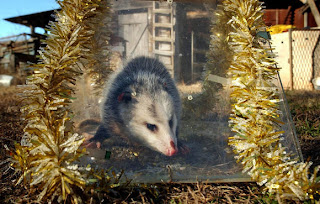 Between the bear stew, the musket blasts and the cross-dressing truck drivers, the Brasstown Opossum Drop offered the state’s liveliest party on New Year’s Eve – without a drop of mountain moonshine. But this year, revelers will mark the year’s last minutes without Brasstown’s fur-covered bigwig, the festival’s namesake. The ‘possum drop will have no ‘possum – not a live one, at least.

A Wake County judge ruled Tuesday that the state cannot issue a special permit allowing a caged marsupial to be lowered 20 feet over a stage – a 20-year tradition once profiled in The New York Times and the highlight of the mountain town’s celebration.

“Hunters must afford wild animals the same right Patrick Henry yearned for,” wrote Senior Administrative Law Judge Fred Morrison Jr. wrote in his order. “’Give me liberty, or give me death!’”

Now, that's just judicial activism as it's most insane. 'Possums are the national roadkill. Probably the stupidest animal actually wearing fur.  I think they actually throw themselves in front of cars because even they know they are the most worthless mammal.

The decision hands a victory to People for the Ethical Treatment of Animals, which sued the state in December and has long argued that confining a ‘possum and subjecting it to loud noises and heavy crowds constitutes cruel treatment, regardless of it being released into the wild after the event. Two years ago, PETA made similar charges about the handling of Punxsutawney Phil, proposing that the Pennsylvania town use a robotic groundhog instead.

I hope they celebrated their victory with the traditional redneck seven course dinner; a six pack and a 'possum.