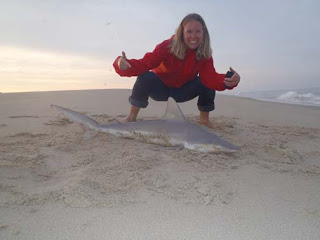 The government plans to require almost all sharks landed by recreational fishermen off the Atlantic Coast and the Gulf of Mexico to measure at least eight feet from nose to fork in the tail, a move that some recreational fishermen said will end their sport but that conservationists say is needed to save an imperiled species.

The debate over how best to protect the dusky shark — which can migrate hundreds of miles in a season but whose juveniles return every summer to the mid-Atlantic — highlights the complicated task of helping shark species recover. 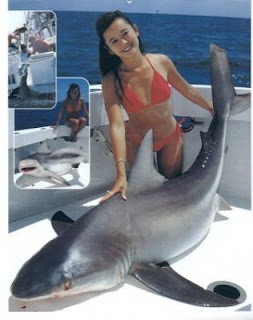 It's interesting that the regulation must cover many different species of sharks to protect the Dusky:


While the new assessment found that some other species — such as the sandbar shark and the blacktip shark — are recovering, NOAA officials said they needed to impose some broader restrictions to address accidental catches of dusky sharks. Brewster-Geisz said dusky sharks end up on long lines set for other species, and recreational anglers sometimes mistake them for other types of sharks.

“It’s not an easy species to identify,” she said, adding that researchers estimate they will have to cut fishing mortality by two-thirds to recover dusky sharks.

Needless to say, such broad restrictions on healthy populations to protect one that's not did not go over well in the shark fishing community:


But Mark Sampson, a charter boat captain based in Ocean City, said increasing the recreational landing requirement from a minimum of 41 / 2 feet to eight feet “is effectively going to shut down the recreational fishery” because blacktip sharks rarely reach eight feet and other species at that length would weigh hundreds of pounds.

“It just about blew me away,” said Sampson, who sits on the outside panel that advises NOAA Fisheries on managing migratory species such as sharks. “I’m all in favor of doing what it takes to protect dusky sharks. However, this isn’t the way to do it.”

Sampson, who also runs Ocean City’s annual shark tournament each June, said he believed NOAA was overestimating how many dusky sharks were accidentally being caught by recreational vessels.

Recreational anglers weren't the only user group affected.  Even though Dusky Sharks are far too rare to support a targeted fishery, restrictions will affect commercial fisherman as well:


The draft regulations — which apply to 15 types of small and large coastal sharks — will also call for periodic closures of a month or two of commercial long-line fisheries off the East Coast in areas where dusky sharks are likely to die when caught on hooks set for other open-ocean species, such as tuna. The guidelines are subject to public comment until Feb. 12 and will be finalized by the end of April.

I suspect this was one of the many regulations that were being held up to put into affect around the election time, regardless of who won, just as a means of  damping down the furor. Fine with me.  I think shark fishing needs to be better regulated.  All sharks reproduce slowly, and it's too easy for fishing to get ahead of reproduction.  And, with a few exceptions, sharks aren't that good to eat anyway, and they're loaded with mercury.  Throw 'em back to catch again.