Reason #3 Trump Should be Reelected 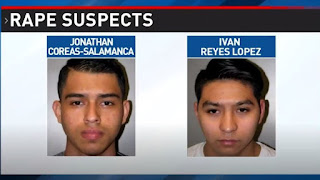 How nice of the police to provide a Spanish translator so that the 19-year-old could explain how he had consensual sex with an 11-year-old. And this raises the question, of course, about why a Maryland high school student requires a translator. This is explained:


According to court documents, Coreas-Salamanca had been living along the 7700 block of 25th Avenue in Adelphi, Md. According to U.S. Immigration and Customs Enforcement, the Salvadoran national is living in the U.S. illegally. The federal law enforcement agency has filed an immigration detainer with the Montgomery County Department of Correction and Rehabilitation.
Court documents state Lopez emigrated from Honduras nearly three years ago. He had been living in an apartment with his uncle along the 8800 block of Lanier Drive in Silver Spring.

The fact that these adult men, one from El Salvador and the other from Honduras, were attending Maryland high schools raised questions:

So, they sneak into the country illegally, go to our schools on our tax money, and rape people. Remember, there is one party that wants to stop illegal immigration, and another party that wants to throw the border open to all comers, and provide free governmental services to all. Vote accordingly.

Linked at Pirate's Cove in the weekly Sorta Blogless Sunday Pinup and links.
Posted by Fritz at 5:14 PM